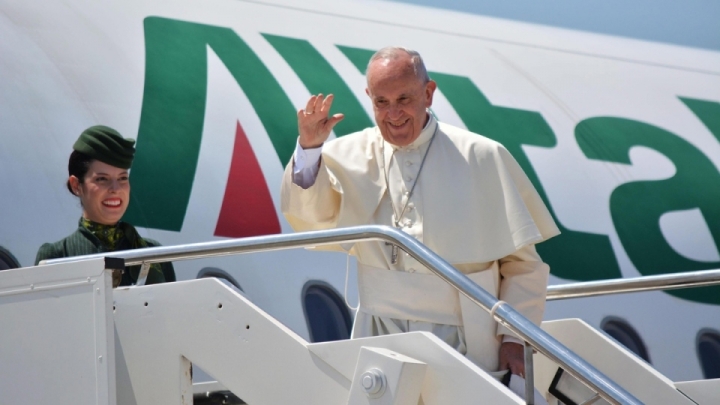 Pope Francis is travelling to Poland to meet young Catholics from around the globe and visit the Auschwitz death camp and many Catholic places in this deeply religious nation, reports CTV News.

"Let's live WYD (World Youth Day) in Krakow together!" the pontiff tweeted before departing from Rome for Krakow, southern Poland, on Wednesday afternoon.

It will be the pope's first visit to central or Eastern Europe. In Krakow, Francis will be greeted by Poland's President Andrzej Duda, Prime Minister Beata Szydlo and other officials. In the evening he is to appear in the window of the residence of Krakow bishops, and chat with some among the hundreds of thousands of pilgrims from around the world gathered for the event that runs through Sunday.

Security was high Wednesday as groups of cheerful young pilgrims were seen in the streets of Krakow, just hours before Francis' arrival for the major Catholic event.

A shadow was cast on the celebrations by the brutal slaying a day earlier of a priest in France, adding to security fears already high due to a string of violent attacks in France and Germany. Polish officials said they have deployed tens of thousands of security officials to cover the event.

Relics of St. Mary Magdalene came to the church from France, for the duration of World Youth Day, and were displayed in a case by the altar.

Poland, a predominantly Catholic country is still proud of the late pontiff, St. John Paul II, who served as priest and archbishop in Krakow before becoming pope.

The sense of expectation was apparent in sunny Krakow on Wednesday with papal white-and-yellow flags and images of Francis and John Paul II decorating the streets. Stages were put up at many locations for concerts and other activities that are being held by and for the pilgrims in Krakow.

There was a heavy presence of police and other security forces across the city, as crowds were increasing everywhere.

The weather forecast for Krakow said rainstorms were possible later in the day.