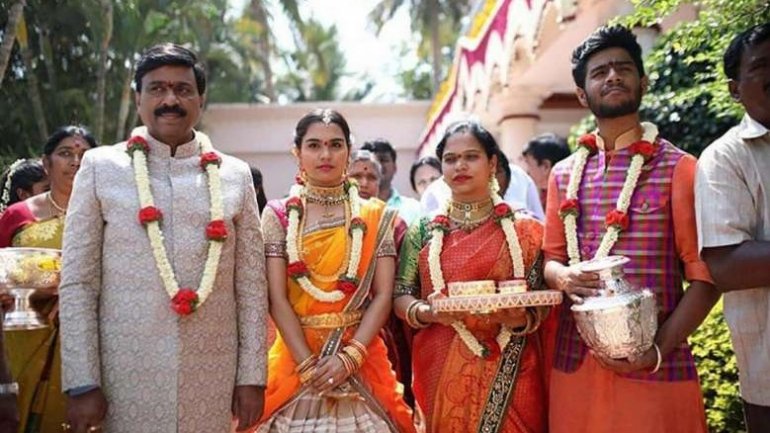 An Indian politician has attracted the fury of people in the poverty-stricken country by throwing an outrageously extravagant wedding for his daughter, according to Daily Mail.

The lavish bash is said to have cost businessmen and ex-state minister Gali Janardhana Reddy an estimated 5 billion rupees - which is equivalent to $74 million.

Guests were invited to daughter Brahmani's wedding with gold-plated invitations, while Bollywood stars performed in a five-day extravaganza that critics have branded an 'obscene display of wealth'.

The wedding invitations arrived in a gold-plated box, containing a card setting out details of the affair, and with an LED screen fitted into the lid.

The video that plays on the screen shows Brahmani wearing a series of fancy gowns, while her fiancé Rajeev Reddy is flanked by five white horses.

Meanwhile, Janardhan Reddy and his wife lip-sync to a song that was composed especially for the wedding.

The wedding kicked off just days after the Indian government announced an overnight ban on 500 and 1,000 rupee notes in a crackdown on illegal cash holding.

The government scrapped the two notes, making redundant the vast majority of currency that Indians use on a daily basis in the country's largely cash-based economy.

The move has hit low-income Indians hard, including traders and ordinary savers who rely on the cash economy.

Many have been standing in long queues at banks to deposit expired money and exchange notes for smaller denominations, and frustration in the country is widespread.

Weddings in India are often opulent affairs, and it is not unusual for payments for services to be made in cash.

Mr Reddy reportedly said he had mortgaged properties in Bangalore and Singapore to fund the celebration, and had made all payments six months ago, when the planning started.

The main event of the almost-week-long celebration will be held tomorrow at sprawling venue the Bangalore Palace.

Preparations for the event began months in advance, and eight Bollywood directors were reportedly hired to create sets resembling ancient Hindu temples, to form a backdrop to the ceremonies.

Guests will be ferried about in luxury bullock carts and fed in a purpose-built village inside the grounds, while 3,000 bouncers and 300 policemen will ensure the event is secure, with the help of sniffer dogs and bomb squads.

Mr Reddy has been criticized and ridiculed on social media, with some users joking about how long he had had to queue at the bank to exchange enough money to pay for the expensive wedding.

His political opponents also used it as an opportunity to question whether the prime minister's crackdown on illegal 'black money' would include elites.

Mr Reddy was a former member of Prime Minister Narendra Modi's Bharatiya Janata Party (BJP) in Karnataka, the state which has Bangalore as its capital.

He recently spent three years in jail on corruption charges, which he denies, but was freed on bail last year.