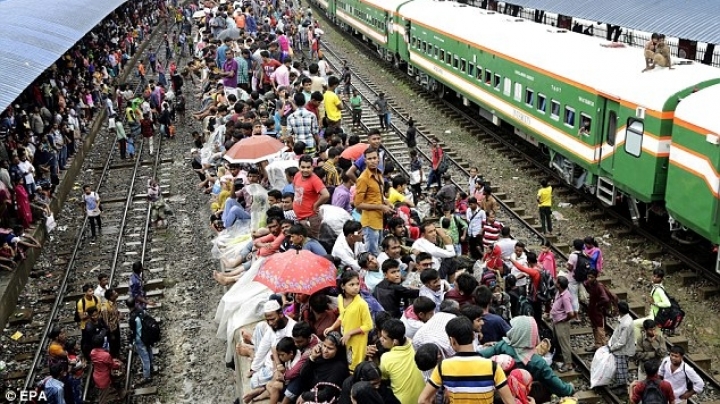 A policeman was hacked to death with a machete in an Islamist attack just days after 20 people were slaughtered in the Bangladeshi capital, reports Daily Mail.

The terrorists carried out the latest deadly assault near a huge prayer in Kishoreganj where 200,000 people had gathered to celebrate the end of Ramadan.

A bomb was detonated at a school police were using as a checkpoint before Molotov cocktails were thrown and gunfire was exchanged between terrorists and police, killing four and injuring seven on Thursday.

Local TV station Somoy TV broadcast footage of the gunfight and reported the slain policeman had been hacked to death.

It's understood the terrorists were hiding inside the school, less than a mile away from the 200,000 Muslims celebrating Eid.

The target could have been the liberal Maulana Farid-uddin Masud, the chief cleric of the main mosque in Kishoreganj, who has led a campaign against Islamist radicals in the country, according to Hindustan Times.

He was descending at the prayer by helicopter when the terrorists struck.

Mahbubur Rahman, a police officer in the district control room, said: 'They threw a bomb at a police checkpost. A police constable was killed in the explosion. One attacker was killed and another was arrested.'

Tofazzal Hosain, who is the district's deputy police chief, said several people had taken part in the attack and some had been armed with machetes - a hallmark of recent Islamist killings in Bangladesh.

'They first threw a small bomb targeting police and then attacked them with machetes. Police retaliated by returning gunfire,' he said.

Azimuddin Biswas, the district administrator, said the attack had taken place on the premises of a nearby school and not on the actual prayer ground.

'The congregation was not affected by the clashes,' according to Biswas.

Although there was no immediate claim of responsibility for the attack, it comes less than a week after Islamists killed 20 hostages and two policemen in an overnight siege at a Western-style cafe in Dhaka.

Bangladesh has been on a heightened state of alert in the wake of the killings in Dhaka last Friday night and many services that were held on Thursday to mark the start of Eid included pleas from religious leaders for an end to the violence.

'Allah, protect our country ... and protect our children from the evils of terrorism,' Mohammad Sadequl Islam, the local imam, told a gathering of around 5,000 devotees at Dhaka's Mahakhali neighbourhood on Thursday.

Many of those who attended services in Dhaka could be seen openly weeping as clerics led prayers for a more peaceful and prosperous Bangladesh.

Bangladesh has been reeling from a growing wave of attacks since the turn of the year, many of which have been claimed by the self-styled Islamic State group or an offshoot of the Al-Qaeda network.

However Prime Minister Sheikh Hasina's secular government has consistently denied that international jihadist networks have gained a foothold in the mainly Muslim country and have said the weekend attack in Dhaka was carried out by members of a local outlawed Islamist group.

All of the victims of the weekend attack in the capital, who included 18 foreigners, were hacked to death.