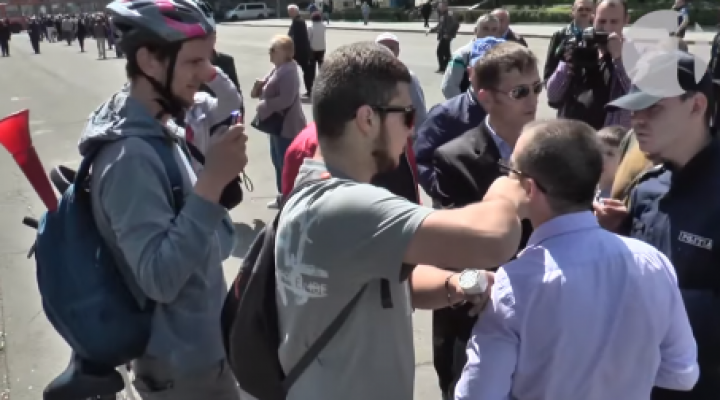 The police have started a criminal investigation into the incident having occurred on June 12 when the journalist Vadim Ungureanu had been aggressed by leaders and supporters of the DA Platform, backed by the fugitive convicts Victor and Viorel Ţopa. The probing detective Vitalie Caldare has confirmed the information for Publika.

The leaders of the Dignity and Truth (DA) Platform, Vasile and Andrei Năstase, and their supporters, aggressed both physically and verbally Today.md reporter Vadim Ungureanu, on June 12, in front of the Culture House in the southern town of Cimişlia. The journalist was covering the public meeting of the Năstase brothers with the locals. Vasile Năstase was the first to attack and insult the journalist.

Ungureanu was then aggressed by Andrei Năstase, who wanted to deprive him of his phone.

Moldova’s Criminal Code stipulates a fine of up to the equivalent of $1,000 for hindering media and intimidating them for critique. On July 5, Vadim Ungureanu was called and heard by the Cimişlia police as aggrieved party.

There were previous cases when the DA Party leaders aggressed the journalist Vadim Ungureanu. At a news conference organized by the DA leaders in downtown Chisinau, Ungureanu was hit in his stomach by a protester.

After that incident, the media NGOs expressed concern as to the cases of Moldovan journalists being aggressed.