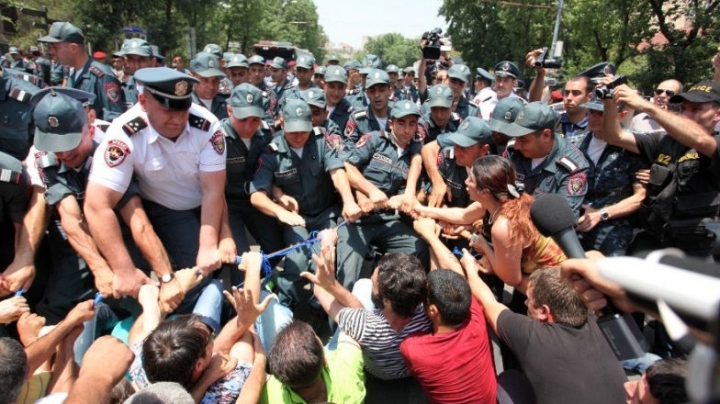 One of the gunmen locked in a protracted stand-off in a police station in the Armenian capital Yerevan shot an officer dead on Saturday, a police spokesman said.

"A sniper opened fire from inside the police station and killed a police officer ... who was sitting in a car parked 350-400 metres (yards) away," Ashot Aharonyan wrote on Facebook.

It comes after Armenia's security services issued an ultimatum to the gunmen, in a bid to resolve the lengthy hostage crisis after dozens were hurt in overnight clashes.

"We are giving members of the armed group until 17:00 (1300 GMT) to lay down their arms and surrender," the Armenian national security services said in a statement.

"Otherwise special forces law enforcement have the right to open fire," it said. "After the events of July 29, any opportunities to resolve the situation with the terrorists peacefully have been exhausted."

Dozens were injured and 26 arrested in the early hours of Saturday after authorities broke up a rally near the police station, where the armed pro-opposition group has been holed up for almost two weeks with several hostages.

More than 70 people were taken to various hospitals around the capital to be treated for injuries including burns and broken limbs.