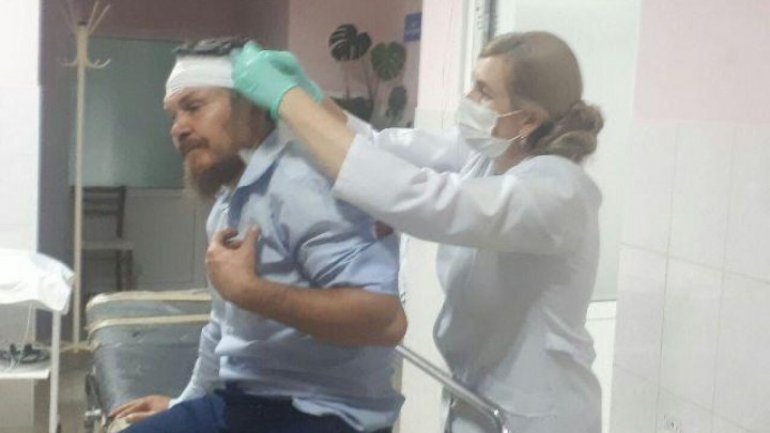 Priest Valeriu Pistrui was hit in the head with a blunt object, near his own car in Iargara village.

"An unknown person hit me in the head. As I fell to my knees my head collided with the car's door, I was also hit in the face", Priest Valeriu Pistrui declared.

His wife was the one to call for an ambulance and police.

"I approached him and asked what happened, but he could only moan in pain. It became obvious to me that he was hit, so I helped him sit in the car and he told me about the attack", his wife Valentina Pistrui stated.

The woman admitted that her husband was threatened before.

"He was threaten. Someone threw a stone and later a black car drove by, warning him to sleep with an eye open", Valentina Pistrui confessed.

The police do not exclude the version that it was a planned attack by the City Mayor.

"Police Department of Leova and investigators have opened up a case on attempted murder. It came to our knowledge that the victim was previously threatened by the City Mayor, along with some other individuals" deputy chief of the Police Department, Gheorghe Cavcaliuc declared.

Valeriu Pistriu has earlier confessed that he was earlier intimidated for refusing to sign papers, confirming that Renato Usatii's foundation has donated 100 thousand lei to the church.

On the city day, in November 2016, representatives of fugitive Renato Usatii's foundation have declared that they intent to donate 100 thousand lei to the local church.

Both the priest, as well as local people thought deny receiving any money.

More than that, Valeriu Pistrui claims that the City Mayor, who is a member of Renato Usatii's political Party has demanded him to sign multiple documents confirming that he received the promised money.