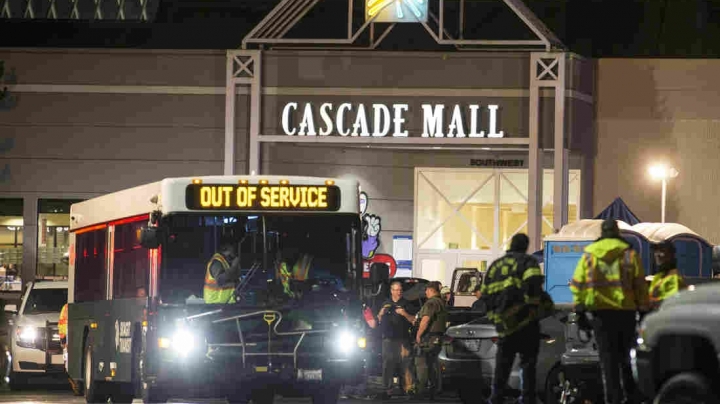 “One lone shooter” remained on the loose following the killing of four women and a man at a mall north of Seattle, police said, reports The Guardian.

Police released an image of the suspect they believe is responsible for the shooting at Cascade mall in Burlington, Washington state, about 105km north of Seattle. The attack happened at around 7.30pm local time.

The department of emergency management said police were looking for a hispanic male in a black T-Shirt. Sergeant Francis said that the suspect was armed with a “hunting type” rifle and had last been seen walking toward Interstate 5.

Authorities said the motive was unknown. The Seattle FBI tweeted that there was no information to suggest any additional attacks were planned in Washington state. Officials asked residents to report any suspicious activity.

Francis said at about 8.30pm that the mall had been evacuated and emergency medical personnel were cleared to enter. Authorities were still doing a “final clear” of the 40,319 sq metres mall late on Friday night, he said. Eleven search teams and two K9 units were involved.

A press conference was scheduled for 8am PT Saturday (11am ET).

The mall parking lot was closed and emergency management officials told people they would be able to retrieve vehicles on Saturday, though the mall said it would be closed for the day.

Authorities initially reported four people were killed, then said three were dead, before revising the number again. Francis said the number fluctuated as authorities searched the shopping centre. A male victim who was critically wounded in the shooting died early on Saturday at a Seattle hospital. No other details about the victims were provided, including their ages.

Washington governor Jay Inslee said in a statement that many questions remained but state patrol and local law enforcement were on the scene working swiftly to locate the shooter and clear the area.

The Cascade mall is an enclosed shopping mall in Burlington, Washington, that opened in 1990, according to the mall’s website. It features JC Penney, TJ Maxx and Macy’s stores, among others, restaurants and a movie theater.