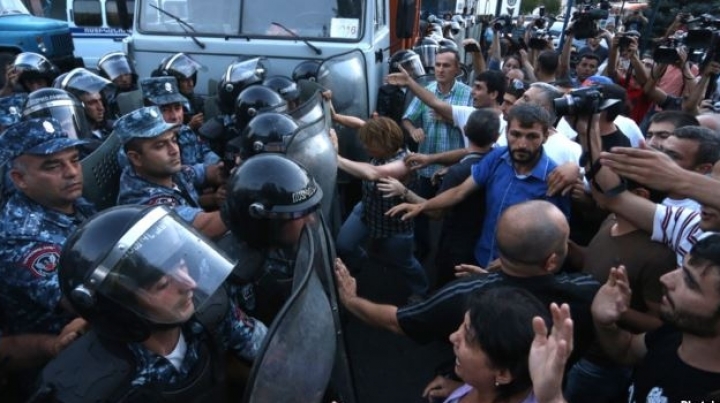 Four policemen were reportedly injured as protesters attempted to cross a cordoned-off area around a Yerevan police station seized by an armed opposition group.

According to Nikol Pashinyan, a member of the Armenian parliament's opposition faction Armenian National Congress, told journalists that "some people attempted to use bypass paths to get into the secured area, which resulted in a clash with police."

He said four police officers were injured when the protesters threw stones at them. He said the police were later treated in a hospital,

Pashinyan and two journalists were earlier permitted by police to enter the secured area to visit the armed group and determine their condition.

Local residents said the protesters were attempting to express their resentment that gas and water supplies have been cut off in the area to avoid possible leaks in case of a shoot-out.

When police blocked them, they started throwing stones and other objects at the police.

"The policemen have been hospitalized. The provokers attempted to escalate the situation. Now everything is quiet," he said.