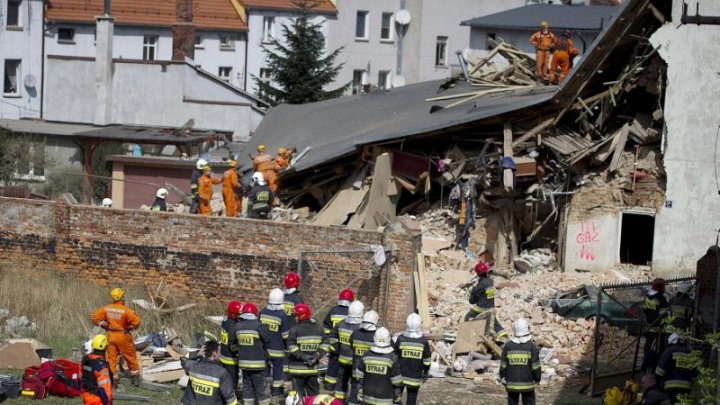 foto: Rescuers and firefighters search for 11 missing people in the rubble of an apartment house that collapsed in Swiebodzice, Poland, on Saturday, April 8, 2017. Firefighters suspect the collapse might have been caused by a gas explosion. Several people were
AFLĂ imediat Știrile Publika.MD. Intră pe Telegram

Officials in Poland say that four people have died and 24 have been injured, including children, in a house collapse in the western city of Poznan.

An apartment block collapsed Sunday in the western city of Poznan, killing four people and injuring 24 others, officials in Poland said.

Spokesman Slawomir Brandt, said 24 teams of firefighters were combing through the rubble after the collapse of a building that contained 18 apartments and 40 residents.

TVP INFO showed part of a four-story building in a heap and rescuers checking the debris. Police and prosecutors were at the site investigating.

Hospital spokeswoman Urszula Laszynska said one little girl remained hospitalized in stable condition, while two other children have been dismissed with bruises.

Residents who were not injured were taken to a nearby hotel.

Regional governor Zbigniew Hoffman said it was too early to determine the cause of the collapse but added that a gas explosion was one possible explanation.

Copyright 2018 The Associated Press. All rights reserved. This material may not be published, broadcast, rewritten or redistributed.