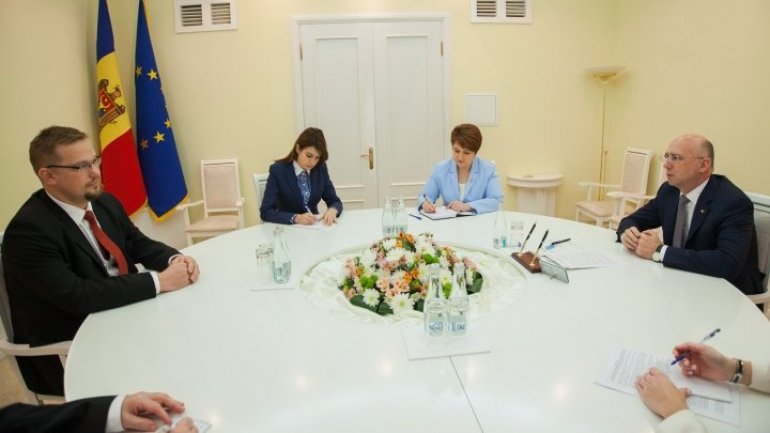 The Moldovan-Polish relations and the their development potentials were discussed by Prime Minister Pavel Filip and the new Polish Ambassador to our country, Bartłomiej Zdaniuk.

"The European path is an internal matter for us. We want to make reforms in our country in order to improve our citizens' welfare to European level," said Pavel Filip.

In the context, the premier referred to our country's relations with the IMF and the EU, as well as to the main reforms promoted by the Government in the justice system, social field as well as measures taken to improve the business environment.

"We still have problems, but the trends are positive. We need the partners' supports to move ahead the reforms," noted Pavel Filip.

"You're good friend to us, we want to help you and we're interested to develop all projects in domain of mutual interest", pointed out the Polish diplomat.

In this context, the Ambassador informed the Polish side's initiative to share the experience and good practices of developing urban centers.

Particular attention was paid to the use of Polish credit for the agriculture development in Moldova.

Prime Minister Pavel Filip mentioned that the most efficient ways to use this loan will be identified. At the same time, the prime minister ruled on extending the presence of Polish investments in the national economy.

The parties also exchanged views on political dialogue, commercial, economic and cultural cooperation between the Republic of Moldova and Poland. Pavel Filip appreciated Poland's support in implementing our country's development policies, as well as political support from the Visegrad Group countries.

Poland is among the top ten trading partners of the Republic of Moldova. In the first half of 2017, bilateral trade grew by 10.7% compared to the same period of 2016. Currently, 37 bilateral treaties are signed between two states which regulate various fields of activity.