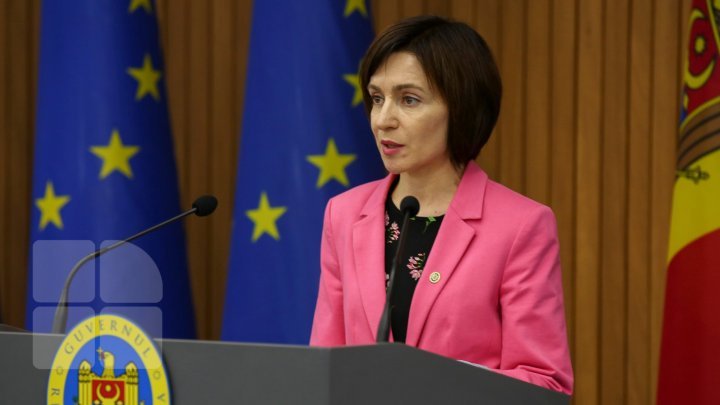 Prime Minister Maia Sandu claims that, by voting today on the censure motion, the deputies will answer what is the vision of justice that citizens need - "an independent and fair justice or a remote control justice, a justice that will purge the corrupt from the system or a justice where corruption still has political protection".

At the sitting of Parliament, where the motion of censure is examined, the chief of the executive has said that this motion appeared "out of fear of an independent Prosecutor General and of a Government delivering results", writes IPN.

"Dear elected representatives of the people, I want to ask you a simple question to which you can give a straight answer, if you wish, in the following minutes: Why are you here? Why are you members of the Parliament of the Republic of Moldova? I believe that the answer to this question will guide your decision today and I hope that at least some of you are aware of the responsibility before the citizens. Not before me, not before the Government, but before the citizens. And citizens expect two things from us: to live better and to have justice. These are the two directions followed by the Government in the past five months,” stressed Prime Minister Maia Sandu.

According to the Prime Minister, these days in Parliament bizarre things kept coming up one after another. First, the opposition Democratic Party withdraws its censure motion, then the Socialist Party submits a censure motion to get rid of the current Cabinet of ministers. "Deputies from the Socialist Party build their motion on false accusations about the worsening of the social and economic situation of the country and throw all the stones at the Government. Why do you lie to people? Where do you see the worsening of social and economic situation? The economic situation worsened only for those whose corruption schemes have been foiled. For the honest people, we thought of a solidarity budget, which will help the needy," emphasized the chief of the executive.

According to Maia Sandu, the citizens did not expect miracles in five months, but they appreciate a responsible Government, made up of honest ministers. "After months of selfless work the results are beginning to appear and this seems to scare you. You would have preferred a docile Government, blind to illegal schemes, controllable or maybe you hoped that the Government will not succeed, knowing very well the serious problems inherited and the hole of about four billion lei in the budget. A Government that acts only in the interests of the people and has managed not only to pay on time the salaries and pensions, but also to find money for the increases foreseen in the 2020 budget frightens you,” said the prime minister.

ACUM bloc wants a real justice, efficient prosecutors and judges who make decisions in the name of the law, and those who stole the billions to go to jail. According to the prime minister, the people wants the same thing, including PSRM voters. "Do you think that those who elected you to the Parliament want you to make an alliance with the PDM to bring down this Government? Or maybe you think that they do not want justice to prevail. On the contrary they want, like all citizens, an honest prosecutor to judge everyone fairly. People are also tired of too many elections and chaos. Why do you want, dear Members of Parliament, to betray your own voters?” asked Maia Sandu.

The prime minister has mentioned that lately she has realized that the vision of Socialist voters, of some PSRM deputies differs from the views of President Dodon. "In June he was afraid of Plahotniuc's justice, he was afraid of the recordings he had leaked to the press, of threats with criminal records for state treason and corruption acts. I could see this, but during consultations and in public Mr. Dodon's vision was very civilized and correct. He says that, like us, he wants an independent and corruption-free justice. He was telling the same thing including to the Socialist voters whom he is betraying again, as we can see,” said Maia Sandu.

The censure motion shall be passed with the vote of the majority of the present deputies. In case the censure motion is carried, the prime minister submits, within a maximum of three days, the resignation of the Government to the President of the Republic of Moldova.