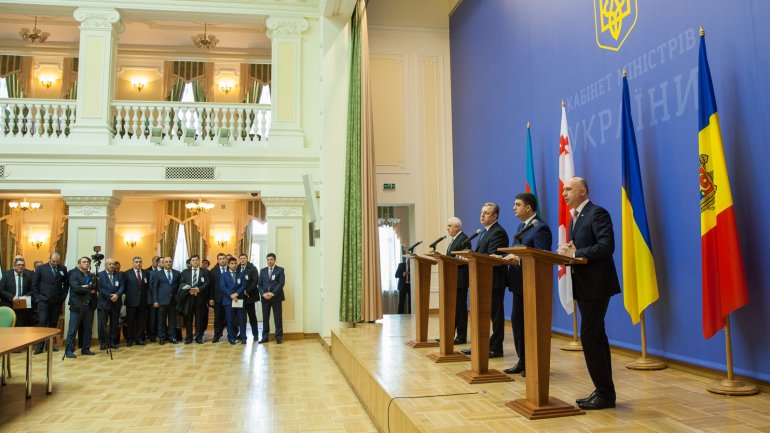 Prime Minister Pavel Filip today participated in a meeting of heads of governments of member states of the Organisation for Democracy and Economic Development –GUAM, held in Kiev, Ukraine.

Pavel Filip thanked the Ukrainian side for the good organization of the meeting. He noted that GUAM organisation provided opportunity to interact and facilitate the high level dialogue between Georgia, Ukraine, Azerbaijan and Moldova.

At the same time, Filip pointed out that it was important to deepen multilateral cooperation to consolidate democracy, develop economy and ensure security in the region. “We discussed possibilities to boost collaboration within the organization and stressed the importance of joint actions to overcome risks we face” , he said.

Also, the officials referred to the settlement of conflicts existing on the territory of the GUAM member states. In the context, Filip noted that these conflicts should be settled through political and diplomatic dialogue by observing sovereignty and territorial integrity of the states and international law standards.

The premier and his counterparts of the GUAM member states signed two protocols on measures to create free trade area and on facilitation of customs procedures among the four states.

“We stressed the importance of boosting the trade exchanges between our states. I am sure that the documents signed today will ensure further development of cooperation opportunities in the social-economic, transport, scientific-technological and humanitarian areas” , he said.

The sides also exchanged opinions about the partnership of Organisation for Democracy and Economic Development –GUAM with the United States and Japan, as well as the collaboration with other regional organizations, such as Visegrad group.

GUAM consultative forum was set up in October 1997. Thereafter, the organization was officially institutionalized to the summit in Kiev on 23 May 2006. The organization promotes development of cooperation between the four states to strengthen stability and security in Europe.