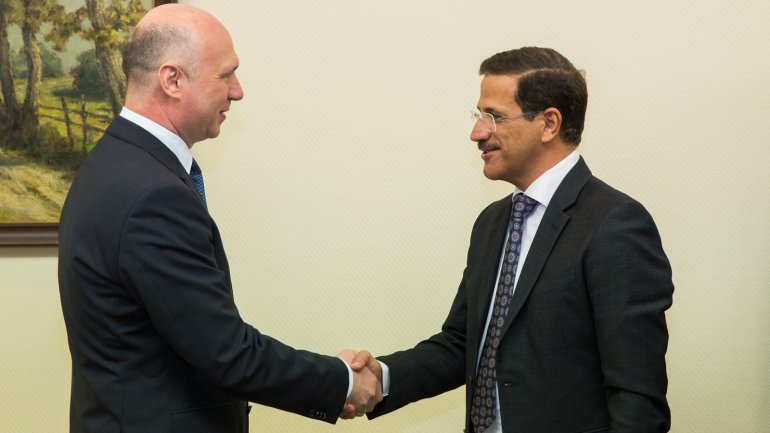 Prime Minister Pavel Filip has met with the Minister of Economy of the United Arab Emirates (UAE), Sultan bin Saeed Al Mansouri. During the talks, the issues related to strengthening of the bilateral dialogue, developing economic relations, focusing on attracting UAE investments in Moldova's economy were discussed.

The head of the Cabinet specified that Moldova has signed an agreement with the IMF, which provides an ambitious program of revival and development of the economy. Also was able defrosting financial assistance from external donors and access to international financial sources. Moldova is therefore in the vision of Prime Minister, a safe country for investment.

"We are in a continuous process of activation and strengthening relations multisectoral neighbors and countries in the region. In fact, Moldova has very good relations with its neighbors and is a gateway to the EU by having a free trade agreement with the bloc" , said Pavel Filip anchoring Moldova as a key regional country in terms of investment potential.

The prime minister said that the first priority of the Government is to attract foreign investment and improve living standards. To this end, they were taken several important decisions on improving the business environment: reducing the number of structures with control and the number of permits, and the number of reports which operators must submit state institutions.

"We are flexible, we will do everything possible to remove any bureaucratic barriers faced by business representatives. We invite you to participate with investment in the areas that interest you. We aim to create more investment opportunities by applying mechanisms of free economic zones , industrial parks and IT parks" , said Pavel Filip.

The prime minister invited UAE companies to participate actively in the privatization planned for 2017 showcasing local companies in various fields. According to the head of Government, 2017 is the year of economic growth and investment.

In turn, the UAE Minister of Economy Sultan bin Saeed Al Mansouri expressed interest in strengthening political and economic partnership with Moldova and Romania's readiness to provide expertise and logistical support in selected areas. The areas of interest were highlighted infrastructure, agriculture, food security, IT sector.

The official welcomed the holding of the Forum of businessmen of the two countries in Chisinau and invited him to attend the Investment Forum in Abu Dhabi in April 2017 and the 2020 Expo Dubai.