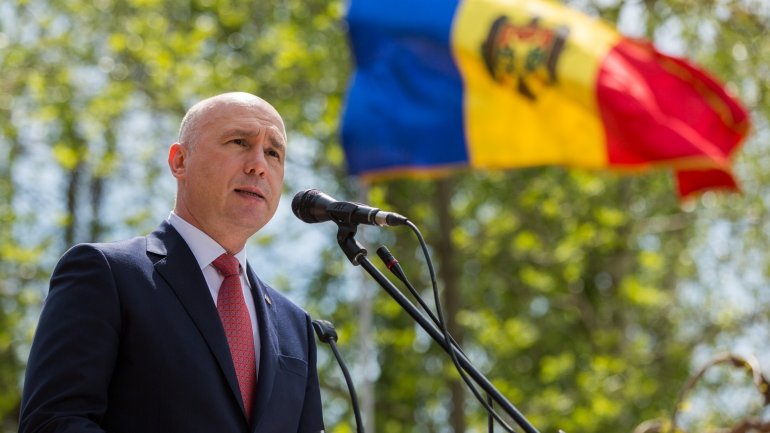 Prime Minister Pavel Filip encourages the citizens to respect the tricolor, to believe and to work for the European future of Moldova. The appeal was made today during the ceremony organized on the occasion of the State Flag Day of Moldova.

The Prime Minister mentioned that tricolor has been a social mobilization element and has represented an expression of the citizens’ patriotism.

"The State Flag says much about who and what we are as a nation, about what and who we are as values, it is a major symbol of our sovereignty and independence. It bears the historical tradition and the care of the ruler Stephen the Great for the guard of the ancestral land" ,  said Pavel Filip.

Also, the Premier said that he felt proud when citizens fly the flag before the house or the balcony of the apartment they live in.

"The flag has become a symbol of the present and future of our state. I encourage you under the tricolor to love and serve our country, to believe in its European future and to work day by day to achieve it" , said the PM.

The State Flag Day was celebrated at the Monument of the Fallen Police Officers, with the participation of the representatives of the Internal Affairs Ministry’s subdivisions. In the context, the Prime Minister addressed a message to the force institutions employees and veterans, praising them for their bravery and sacrifice.

"With the tricolor we keep the memory of the martyrs, the nation, we defend the national values. A special significance has the state flag within the Internal Affairs Ministry, representing unity, faith, devotion, honesty and honor for the policemen. The symbol of our sovereignty and independence is always close to you and mobilize you for good things and professional achievements in the name of the peace and prosperity of the Republic of Moldova" , concluded Pavel Filip.

The State Flag Day was established in 2010, the tricolor being accepted officially on 27 April 1990.