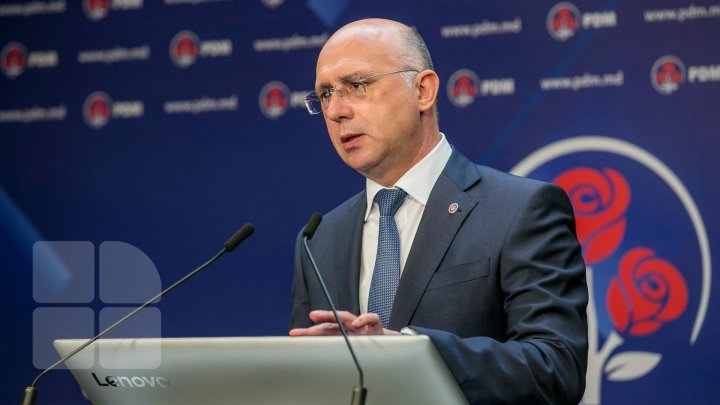 Campaign for parliamentary elections was officially launched today and will end on February 24.

This year, the vote will be based on the mixed system and campaign during pre-election and on election was approved.

Also today, electoral campaign for parliamentary were launched in the meeting of the Democratic Party, where prime minister Pavel Filip delivered a speech:

"We commence this campaign with the feeling that we fulfill our duty for citizens and we're still asking for their trust", introduced Pavel Filip.

"As a Prime Minister, we asked our partners to judge us by results and fruits can be seen. Well-being of citizens is improved. We didn't make miracles but build the foundation of welfare, it's going to grow. After three years, we don't just promise, we act simultaneously which differentiate us with the competitors," said the prime minister.

"We raised salaries on average by more than 50 percent and they are likely to grow if the Democratic Party is elected.

We managed to increase pensions over the existing minimum. We proved that reforms don't only exist on papers. And we need to pay attention to more vulnerable class. Then the idea of 600-lei support for needy pensioners was drawn up. This will be voted for after elections as we will be in government, we will establish the Easter support. We also raised the allowance from 3,000 to 6,300, and this year up to 10,000 lei," said Pavel Filip.

"Every child is going to receive 200 lei of allowance per month until he reaches the age of 18. In First House project, many young people caught their dreams of owning their apartments. We increase the country economy up to 4% every year. These are few of reforms we managed to carry out during years of governance. I urge all you to join the Democratic party, choose the country's progress not chaos, and vote for the Democratic party because I believe in our projects, our strength and our victory", prime minister Pavel Filip concluded his speech.

"More actions, less words" is the slogan the Democratic Party of Moldova launched its electoral campaign for the February 24 parliamentary elections.