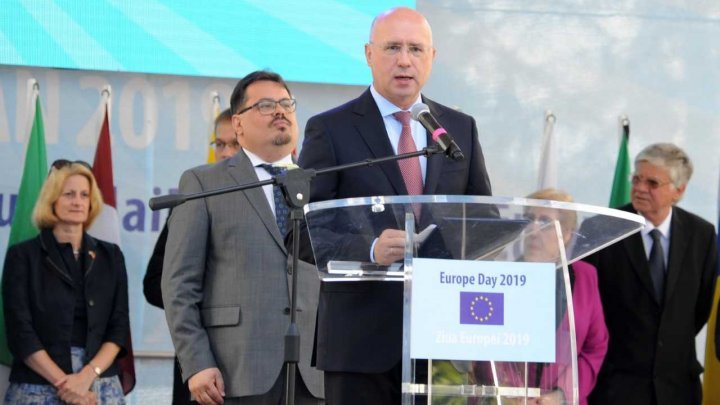 PM Pavel Filip attended the inauguration of European City 2019 organized by EU Delegation to Chisinau on the occasion of Europe Day.

Delivering a speech at the event, PM Filip highlighted that European path is not about geopolitics but the people. It's a development model based on democracy, liberty and understanding.

"Europe is not only a destination but also a path. We sincerely want to become a EU member. This's our country's destination. An approach towards EU is carried out by the facts every day", said Filip.

The Moldovan official also emphasized that we should think to act to foster the European values.

"Let's become European people by actions and mindset, not by declarations. That means we assume the responsibilities in our actions, we become tolerant and better. Let's build a Europe right here, in our country, Moldova", concluded the official.

In turn, Peter Michalko, the Chief of EU Delegation to Moldova mentioned that Moldova - EU relations remain strong. Reviewing the progresses recorded over the last few years, Mr Michalko highlighted the economic reforms, the implementation of Free Trade Agreement, the increase in export to EU countries and the stability of financial system.

The European official encouraged Chisinau administration to carry on the effort in justice system reform, the fights against corruption and consolidation of rule of law.

Finally, the officials visited the tents of EU Ambassadors and non-government institutions where they discussed further EU projects implemented in our country.

The European City is opened in the public garden Stefan Cel Mare in Chisinau during May 11 - 12. All visitors are welcomed to know the EU cultures and cuisine, listen to music and watch movies.