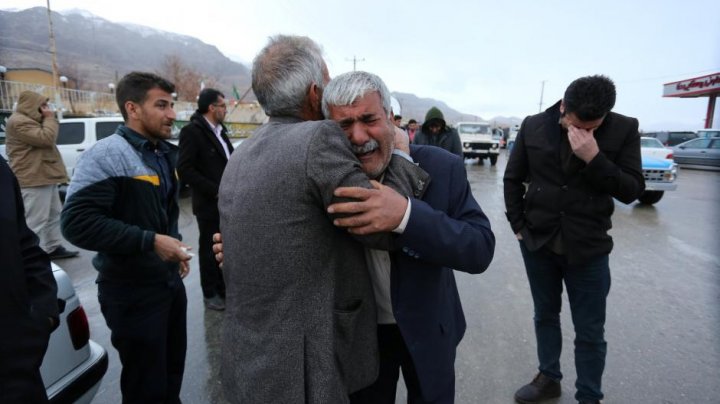 foto: Relatives of passengers who were believed to have been killed in a plane crash react near the town of Semirom, Iran, February 18, 2017. REUTERS/Tasnim News Agency
AFLĂ imediat Știrile Publika.MD. Intră pe Telegram

All 65 passengers and crew were feared dead in a plane crash in central Iran on Sunday after the domestic flight came down in bad weather in a mountainous region.

A spokesman for Iranian carrier Aseman Airlines had told state television everyone was killed, but the airline then issued a statement saying it could not reach the crash site and could not “accurately and definitely confirm” everyone died.

The airline had also initially said 60 passengers and six crew were on board the twin-engined turboprop ATR 72 that was flying to the southwestern city of Yasuj. But it later said there were a total of 65 people on board, as one passenger had missed the flight.

“It is getting colder and darker and still no sign of the plane,” said a television reporter accompanying rescue teams searching snow-covered areas in Mount Dena which has more than 40 peaks higher than 4,000 meters (13,000 feet).

Media reports said the plane disappeared from radar screens 50 minutes after taking off from Mehrabad airport in the southwest of the capital. It mainly handles domestic flights.

“I kept telephoning all morning but they (the relative) wouldn’t answer. So I called my brother and he said they will get here, it (the plane) is not behind schedule yet,” a young woman told a reporter for state television.

“I told him it is raining here. He said no (meaning, don’t worry). He called later and said the plane had crashed.”

Supreme Leader Ayatollah Ali Khamenei and President Hassan Rouhani issued messages of condolences. The president asked the transport minister to lead an investigation into the crash.

Iran has suffered several plane crashes in the past few decades. Tehran says U.S. sanctions have long prevented it from buying new aircraft or spare parts from the West. The crashed ATR was 25 years old, officials said.

A deal with world powers on Iran’s nuclear program has lifted some of those sanctions, opening the way for Iranian airlines to update their creaking fleets.

Based in the southern French city of Toulouse, ATR is a joint venture between Airbus and Italy’s Leonardo

Earlier air disasters include the crash of a Boeing 727 passenger plane in 2011 which killed 78 people in the northwest of Iran, and the 2009 crash of a Caspian Airlines Tupolev aircraft bound for Armenia which killed all 168 people on board.

One of Iran’s worst air accidents happened in February 2003 when an Iranian Ilyushin-76 troop carrier crashed in southeast Iran, killing all 276 Revolutionary Guard soldiers and crew.