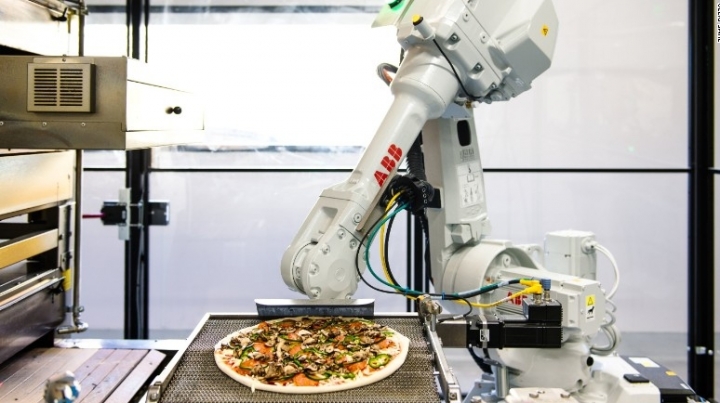 Zume Pizza, a startup in Mountain View, California, is known for using a fleet of robots in the kitchen to speed up the pizza making process. But now, the company is outfitting its pizza delivery truck with 56 ovens programmed to make pies en route to customers.

"The average delivery time for pizza delivery is 45 minutes," said Julia Collins, cofounder of Zume Pizza. "By cooking pizza on the go, we don't have to use chemicals to preserve its shelf life as it sits in a cardboard box in the backseat of a car."

After a customer places an order online or via the Zume Pizza app, the request comes into its central kitchen at its headquarters. There, robots and a few humans on staff prep the pizza pie, including the dough and toppings.

Each robot has a name and a designated duty. Pepe and John dispense sauce onto pies, while Marta spreads the sauce.

Each pizza is partially baked for 90 seconds in an 800-degree oven. Bruno the robot is in charge of putting the pies into oven.

The partially baked pie is then loaded into one of the mobile ovens in the truck. Vincencio, a new robot that joins the robot fleet later this year, will take over the task of loading and reloading the pies into the truck's ovens.