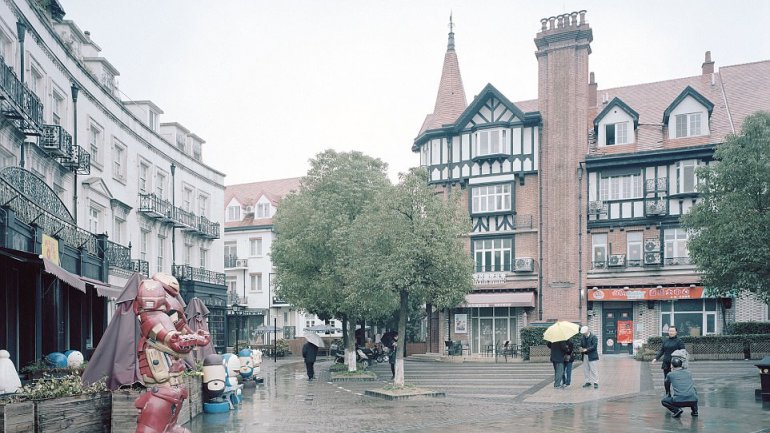 A photographer has been travelling the world to take pictures of cities and buildings - many of which are not all that they seem, wrote dailymail.co.uk

Gregory Sailer's unique series has taken him to places around the world where the buildings are little more than illusions.

Sailer got to visit one of 12 fake towns the U.S. army have built specifically to train troops

From the likes of Mosul in Iraq to fake Arabic cities recreated in the Mojave Desert, California to an English village in China giving the locals a taste of Europe.

Sailer, who is based in Tyrol, Austria, came up with the idea for his project in 2015, having initially researched backdrops, illusions and artificially created urban constructions.

In total, 37-year-old Sailer's intrigue took him to 25 locations in seven different countries.

'Here I was looking for this kind of tightrope walk between illusion and reality. To construct illusions and break with them, to disillusion, to play with visual realities.

'The aim of the project is to enable access to the world of fakes, copies and backdrops.

'The visitor gets the possibility to follow and question these sometimes absurd developments of today's society.'

Some of the most interesting and exhilarating locations to visit, Sailer said were the urban warfare training environments.

The series took two years to complete between 2015 and 2017 and is called The Potemkin Village. The pictures are compiled in a newly-released book.

The term Potemkin Village stems from a legend about Russian Girgori Potemkin, who, according to reports, built impressive yet fake villages along a route Catherine the Great was once due to travel.

Today, the term is used to describe a facade that is aimed to hide something undesirable beneath.

A number of exhibitions are planned for in Sailer's native Austria, as well as in France, Germany and Russia.

Gregor said: 'It couldn't be better and that is kind of a thing that motivates me to continue my work in general.

'The project is finished for now. But who knows what happens in the future?'