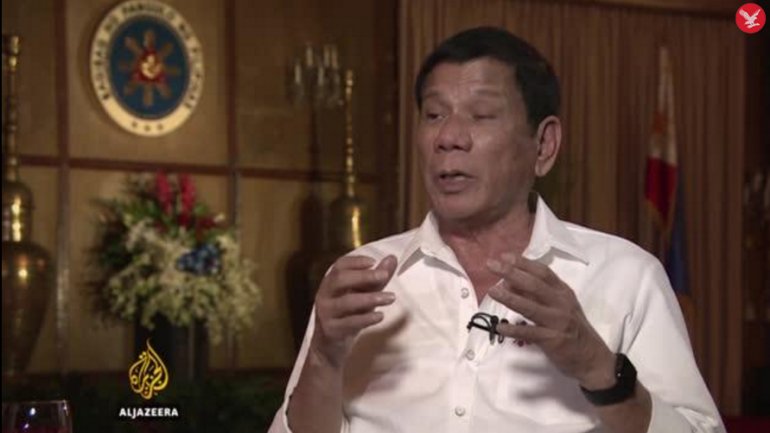 The President of the Philippines has said he does not “give a s***” about human rights while dismissing the deaths of innocent civilians and children in his brutal war on drugs, Independent informs.

More than 3,500 people have been killed in the first 100 days of Rodrigo Duterte’s presidency, including suspected drug users, addicts, dealers and smugglers shot by security forces and vigilante gangs.

But international observers have warned that many of the dead are innocent people caught in the crossfire or murdered over personal scores.

“If it involves human rights, I don’t give a s***. I have to strike fear because the enemies of the state are out there to destroy children.”

Mr Duterte has been unrepentant about his calls for supporters to kill criminals, sparking alarm from the United Nations and international community, as well as a cooling of relations with the US after the President hit back at criticism by calling Barack Obama a “son of a whore”.

In an interview with Al Jazeera, he claimed there was “no crime” in threatening to kill the three million drug addicts he believes live in the Philippines.

Mr Duterte said he had launched his bloody war on drugs “because of the sheer number of people contaminated will pull my country down – it will destroy the next generation of Filipinos.”

“You destroy my country, I'll kill you,” he added. “And it's a legitimate thing. If you destroy our young children, I will kill you.

Mr Duterte said the deaths of children and innocent people would be investigated but said there was “no criminal liability” for security forces who kill innocent bystanders in operations, comparing them to the US-led coalition’s bombing of Isis territory.

Despite the warnings, the President's approval ratings in the Philippines remain high, standing at 86 per cent against just 3 per cent "disapproval" according to a survey released by Pulse Asia Research on Thursday