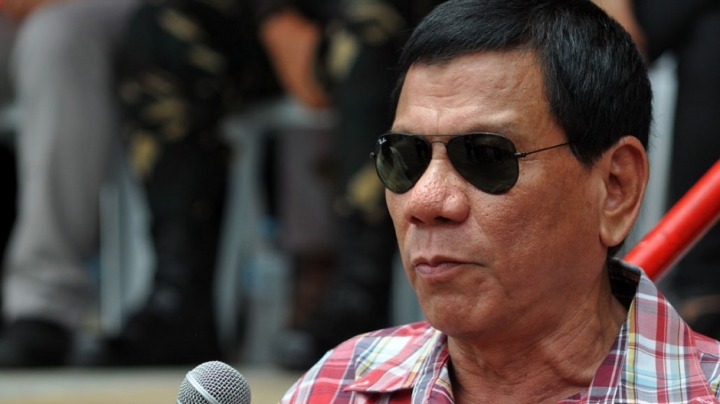 President Duterte explained it was never his intention to hurt the feelings of the Jewish community and his comments Friday were in response to critics who compared him to Hitler.

"The people said this Duterte is Hitler, this is killer and so I said in the airport when I arrived, all right I am Duterte, I am a killer. The Jewish community all over the world reacted," the official Philippines News Agency (PNA) translated his comments in Tagalog as saying.

Duterte added in English: "I would like to make it now, here and now, that there was never an intention on my part to derogate the memories of six million Jews murdered by the Germans."

Duterte's speech in his hometown of Davao City provoked global outrage and was condemned by World Jewish Congress President Ronald Lauder and other politicians.

In the speech, Duterte said: "Hitler massacred 3 million Jews. Now there is 3 million, what is it, 3 million drug addicts (in the Philippines), there are. I'd be happy to slaughter them. At least if Germany had Hitler, the Philippines would have (me). You know my victims, I would like (them) to be all criminals, to finish the problem of my country and save the next generation from perdition."

Ernesto Abella, his spokesman, had earlier sought to clarify the leader's controversial comments.

Abella said Duterte's opponents first brought up the Hitler reference before the May presidential election to "gain political mileage."

The statement said Duterte likewise drew an "oblique conclusion, that while the Holocaust was an attempt to exterminate the future generation of Jews, drug-related killings as a result of legitimate police operations ... will nevertheless result in the salvation of the next generation of Filipinos."

Abella said the Presidential Palace "deplores the Hitler allusion of President Duterte's anti-drug war as another crude attempt to vilify the President in the eyes of the world."

Also Friday, US Defense Secretary of Defense Ash Carter called the comments "deeply troubling" after a meeting of defense ministers from the Association of Southeast Asian Nations in Hawaii. Carter told reporters that Duterte's remarks were not discussed at the meeting.

He said that US-Philippines cooperation "has served the interests of our nations for many years now" and added that he had good discussions about "ongoing alliance operations" with his counterpart from the Philippines.

Toner told reporters Friday in Washington that the US-Philippines relationship was based on "our shared belief in human rights and human dignity, and within that context, President Duterte's comments are a significant departure from that tradition."

"Words matter, especially when they're from leaders of sovereign nations," he said.