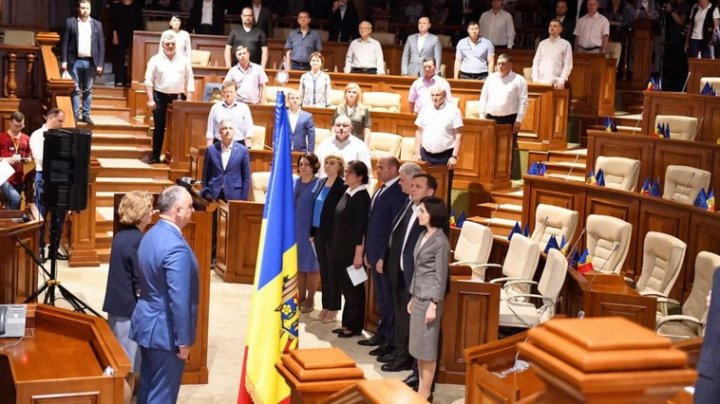 Maia Sandu went to Brussels to justify the politics of unacceptable concessions to Moscow. She declared she is determined to relaunch the relations with the former metropolis, reports Deschide.md.

Three lies in a sentence

According to the Moldovan prime minister, her Cabinet will restore “our strategic partnership with Romania and Ukraine. Regarding the relation with Russia we restarted the dialogue that has been reduced to zero by the previous Government”.
Thus, the head of the government succeeded an extremely rare performance. In a single sentence she packed no less than three gross lies.

First, Chisinau’s strategic partnerships with Romania and with Ukraine don’t need to be restored. They have not been affected and are successfully working.

The privileged relation with Bucharest is very fine, fact confirmed during the last years by both sides. Despite some syncope, since 2009 it is on an upward trend.

As regards to Ukraine, the cooperation with the Eastern neighbor has reached the top point namely during the mandate of the Filip Government. The joint control on the Transdniestrian side of the border represents the most evident expression of the partnership between the two countries.

The promising Moldovan-Ukrainian relations have somewhat cooled namely following the establishment of the ACUM-PSRM government in Chisinau, because Kiev does not see with good eyes the accession to power of a pro-Kremlin party. However, the partnership seems to resist. Even the recent visit to Kiev of Maia Sandu has confirmed this.

So, it is not necessary to rebuild what has actually never been broken. In Brussels, the prime minister, delicately speaking, has flung some nonsense in front of the European partners.

The head of the Government is right about the dialogue with Russia that, surely, was reduced to zero. But not by the former government, as implies Maia Sandu, but by the Kremlin.

Russia, as it is known, exasperate by the investigation of the so-called “Russian Laundromat”, has started to harass Moldovan officials who were paying working visits in the former metropolis three years ago. Subsequent, the situation got worse after Moscow’s brutal attempts in the domestic affairs of Moldova.

To defend the national interest, Chisinau blocked the access of Russian soldiers who were looking to illegally infiltrate in Transdniestria. The Russian Deputy Prime Minister, Dmitry Rogozin, was forbidden to enter on the territory of the Republic of Moldova.
Measures to fight Russian propaganda have been taken. The spy networks of Moscow’s intelligence have been disbanded. Dubious Russian investors have been chased away from the banking system of the Republic of Moldova.
Last but not least, the Moldovan diplomacy succeeded to adopt in 2018 a resolution of the UN General Assembly that condemns the foreign military presence on the Dniester River and demands the evacuation of the Russian troops and munition from the region.
It is no surprise that under these circumstances, Putin, off his hinges, overturned every contact with the Chisinau authorities, the only exception being with President Igor Dodon. How does Maia plan to relaunch the dialogue with Russia if the Moldovan side did not interrupt it?

Treason to the end?

Does the Moldovan prime minister want to bow again to the Eastern azimuths? Will she go to Moscow with her head bent to ask for forgiveness for the arrest of the Russian spies? Will she widely open the doors for the putinist propaganda?

Will she allow the oligarchs from the entourage of the Kremlin leader to recapture again the Moldovan banking system? Will she humbly bow in front of Putin? Will she push the treason to the end?

And one more question. Will she promote the Russian fake of the alleged abandonment of the federalization plan?

Anyway, in Brussels, Maia Sandu has created the impression that she is playing up to Russians on the Transdniestrian issue. That she sings a score written at Moscow.

She stated she will insist “on the withdrawal of Russian forces from the sovereign territory of the Republic of Moldova”. Thunderous applause!

What followed, however, raises several questions. “We will not accept the federalization as a solution to solve the Transdniestrian conflict and we will continue with the politician negotiations to obtain a special status for Transdniestria in a territorial integrated Moldova,” she said.

But this is what Igor Dodon confirms today. For some time past, nor does he use the "federalization" term. It sounds ugly. It does not fit to the moment, states the pro-Russian president.

Of course, his new position is perfectly explainable. Previously, Dodon was speaking everywhere about the federalization only because this was what his nostalgic voters wanted to hear.

Moscow gave up on the old-time clichés of the Transdniestrian vocabulary, although without giving up to its revenge plans. Several years already since Russians don’t use the “federalization” word, knowing that it provokes allergy in Chisinau after the death of the Kozak memorandum.
The former Deputy of the Russian Foreign Minister, Grigory Karasin, has successfully included another term, that of a “special status” (osobii raion). The new formula is nothing but a poisoned bait that, unfortunately, has been bitten by the Chisinau authorities that took it over thoughtless.
In reality, the “special status”, as Moscow sees it, represents the same “federalization”. The new covers have the same imperialist content.
The Kremlin claims the self-proclaimed republic at Dniester to become a kind of state in the state. In fact, the international legitimacy of the region occupied by the Russians in an asymmetric federation is being pursued.

The right position would be to not anticipate the forms of autonomy for the Transdniestrian region before the complete withdrawal of the Russian troops. Recalling the Russian story about the "special status," Maia Sandu does nothing but giving grist to the mill to Moscow’s intrigues against the Republic of Moldova.

Compromise to save PSRM

We have to understand that Russia wanted at all costs Plahotniuc’s departure, not because he was an oligarch who “captured the state”. About this Putin doesn’t care, he himself being a kleptocrat on the top of an oligarchic regime.

Russians made a compromise with Berlin regarding the succession of power in the Republic of Moldova, as it was about to lose every influence they had here. Their road to Transdniestria is practically closed. GOTR (Operational Group of the Russian Troops), lacking a normal supply, is suffocating.

Neither in Chisinau were things better. The maneuver space for Kremlin’s people is narrowing day by day, and the largest pro-Russian party, PSRM, risks to start down-grade. The Socialists fully depended on funding from Moscow, and the justice had undoubted evidence that they were violating the law.

The well-known political analyst Vladimir Socor recognizes, in fact, in an interview for Radio Free Europe that the Russian influence in Moldova was on a brink of collapse. A fervent propagandist in the West of the cohabitation between Vladimir Voronin and Iurie Rosca, today he somehow represents abroad the “Agitprop” of Victor Topa, pleading for the Kozak alliance.

“The participation of the Socialists Party in government is, of course, one of the Russia’s interests,” says Socor. And he explains what has been bothering Russians most than anything lately.

When Dodon and his company will fully recover, when they will take over the essential leverages of power (defense, security, border police, special forces), when they will strengthen their positions in the local and central administration under the thin umbrella of the ACUM bloc, the hour of revenge will come. Moscow will become more influence than ever in the Republic of Moldova due to Maia Sandu and Andrei Nastase.
AFLĂ imediat Știrile Publika.MD. Intră pe Telegram