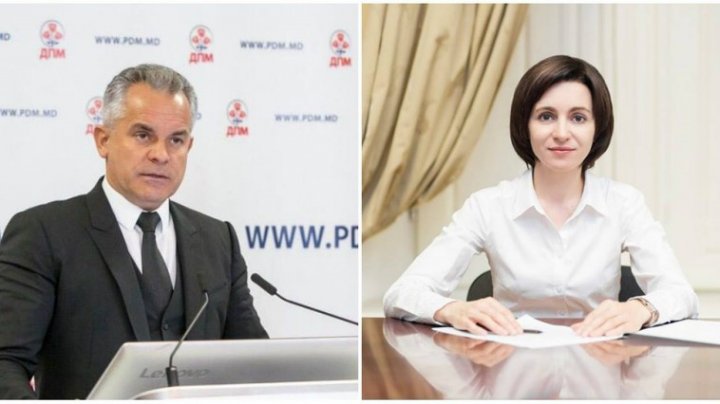 Sometimes people make wrong choices to find the right path. As a consequence, instead reaching the destination, they go the opposite direction, reports Deschide.md.

Maia Sandu, in her ardent desire to get closer the moment of extradition of 'the bad oligarch' has taken refuge abroad, did the exact opposite. The other days, flaunting all her ill will towards Vlad Plahotniuc, she knocked herself down.

During a TV interview, Prime Minister stated that the next general prosecutor has to make an inquiry to several countries where the former PDM leader might be and has to bring him back in Moldova. According to her, the oligarch 'must be charged on the basis of the evidence that I am sure exists'.

The head of the Government reproached the prosecutors for their lack of courage and showed to be confident that the 'request for extradition, including in USA or other countries where he might hide' is going to be made soon. She has no doubts regarding Plahotniuc’s culpability and judges him a priori.

Maia Sandu is confident that incriminating evidence 'exists', even if the alleged illegalities of the former PDM leader have not been investigated yet. Ignoring the presumption of innocence and the separation of state powers does not allow a politician to give verdicts instead of judges – the chief of the Government accuses her political competitor, at the same time suspecting of cowardice the prosecutors who took no action to start a criminal case against him.

I guess the Prime Minister doesn’t realize that, by showing off in an unacceptable way the judicial verve, she committed, unwittingly, a pastiche that can turn against her. She unconsciously imitated the speech of a great oligarch from the post-Soviet space, other than Plahotniuc of course.

We are talking about Bidzina Ivanishvili, the founder and the leader of the political party 'Georgian Dream'. He has been ruling the country since 2012, when he defeated the party of Mikheil Saakashvili during parliamentary elections.

As in Chisinau these days, 7 years ago in Tbilisi was a furious hysteria against the former government. Mikheil Saakashvili was demonized, being charged of all the troubles of the country.

The former president of Georgia was accused of abuse of power, judged in absentia and convicted. Based on the court’s sentence, he has been put into international criminal search.

Bidzina Ivanishvili promised to obtain in short time the extradition, regardless where his political enemy was. But they didn’t have to look for Saakashvili. He settled in USA and wasn’t hiding this.

Although Georgia, since the investiture of the new power, did not come out of Washington's graces, the Americans ignored Tbilisi prosecutors' request to extradite Saakashvili. Neither did the European justice move a finger to search him.

As a result, the tentative of the new government to obtain international search of the former Georgian leader went flop. Currently wanted only at domestic level, Saakashvili is walking around Europe and America without being afraid of being retained.

Resigned, Ivanishvili let it go a little while ago. He does not ask for extradition, because he knows it is pointless.

It is true that every now and again, he gives Saakashvili the jimjams. He swears at him like a flipping docker. The other day, he called him 'a coward who is afraid to come home, where prison waits for him'.

It is pointless, however. Saakashvili is untouchable by Ivanishvili’s justice.

The former Georgian president and the Moldovan 'coordinator' of the former Alliance for European Integration are different persons, of course. The first fought with oligarchy, the latter is himself an oligarch.

Saakashvili has suppressed the old corruption schemes in the core of the public institutions, managing to clear the administration of mafia elements. On the contrary, Plahotniuc, as Filat, used pervert mishmashes of bribetakers placed in high positions to consolidate his political and economic power.

On the other hand, Saakashvili committed mistakes as well. The fight against cleptocracy in Georgia was not conducted in white gloves. It seems that often during his term the justice was biased and as selective as ours.
Plahotniuc monumentally blundered, as he admitted himself after he went abroad. He did not effectively fight with the mafia and bribery at high level, he inhibited the justice and introduced an authoritarian style of governing.

But, at the same time, he put Rogozin in his place, he fought against and reduced the malign influence of Russia in Moldova. He obtained the adoption by the UN General Assembly of a resolution that urges the evacuation of the Russian troops from Transdniestria. He exposed the 'Russian Laundromat' and destroyed the espionage networks of the Russian intelligence.

Thus, Saakashvili and Plahotniuc have something in common. Both have positioned themselves as Atlantists, have opposed the Russian hybrid war, have looked for and received American support.

Or, USA never betrays its allies that served it and were loyal to it, even if their reputation often raises questions. Franklin Roosevelt said about the former dictator of Nicaragua that 'Somoza may be a son of a bitch, but he's our son of a bitch'.

If Plahotniuc was not considered a loyal person to and by the United States, he would have had the fate of the Ukrainian oligarch Dmytro Firtash. The latter is accused in USA for corruption, America asking Austria for the extradition of the tycoon since 2014.

And, in the end, they achieved their goal. Recently, the Minister of Justice of Austria, on the basis of a decision of the Court of Justice of Vienna, approved the extradition of Firtash across the Ocean.

But this is not the case of Plahotniuc. The former PDM leader is not being charged for anything in US.

Moreover, the diplomatic Mission of the USA in Chisinau itself let on that Plahotniuc is on the territory of the United States. That was the reason for our idea that the former Democrat leader enjoys, in one way or another, the protection from the US Government.

If guilty, let him answer for that

I would not want to be misunderstood. If Plahotniuc is guilty, he has to answer in front of the law. But only following an unbiased judicial process.

Only that under the circumstances when USA and the entire free world are forced to face some silly regimes placed on the wrong side of the history – as Barack Obama put it, 'the Somoza factor' is still working – the allies cannot be betrayed, as one day you risk to be left with no friend in the world.

Still, I don’t deny that under certain conditions the extradition would be possible. However, Americans can surrender a person to another state only if they are sure that that person will not be the victim of political revenge and will be judged rightfully.

Or, Ivanishvili’s Georgia does not provide evidence of equitable justice. It is up to everyone's minds that the current government in Tbilisi is acting out of hatred against Saakashvili.

Maia Sandu, neglecting the presumption of innocence and proving to be confident, in absence of a judicial investigation, that the oligarch has taken refuge overseas is guilty, did nothing else but to repeat the mistake of Ivanishvili. She gave the American partners reasons to suspect that she seeks nothing but political revenge.

Therefore, she offered, unwillingly, an alibi to Plahotniuc to not be extradited to Moldova. Not to mention that in the situation when the ACUM bloc shares power with a pro-Russian party, any judicial cooperation of the United States with their Moldovan counterparts is problematic, if not even excluded.
AFLĂ imediat Știrile Publika.MD. Intră pe Telegram