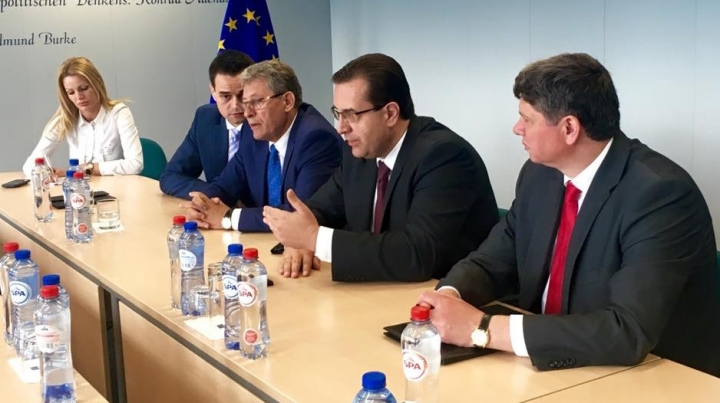 Democratic leader Marian Lupu (PDM) has had a meeting with ambassador Thomas Mayr Harting, director for Europe and Central Asia within the European Service of External Action, with Michael Karnitschnig, office head of the Commissioner for European Neighbourhood Policy and Enlargement Negotiations, with Carl Hartzell - a member of the office of the European Council, Donald Tusk.

The officials have discussed issues related to the Road Map and strategic aspects in cooperating with the EU.

According to Marian Lupu, the discussions have touched upon the following:

- Resuming the financing, from the European funds, of public investment projects in Moldova, especially in the social area. We have been assured that as soon as the Agreement with the IMF is inked, the financing of those projects and the budgetary support will be resumed.

- Implementing the Roadmap by Moldova‬ in ratio of 75%. The European colleagues have positively appreciated our commitment, determination and accomplishments. They have appreciated the efforts undertaken by the Government and parliamentary majority and the basis readied by structural reforms.

"Our interlocutors have appreciated the stabilization in politics, economy, society, the order established in the public finances. The efforts and results of these six months of ruling were appreciated, as they have contributed to regaining the trust and partnership with Brussels. The European agenda – now largely overwhelmed by the Brexit – won’t diminish the focus on the Eastern Partnership, especially on the states signatory of the Association Agreement," Marian Lupu pointed out.