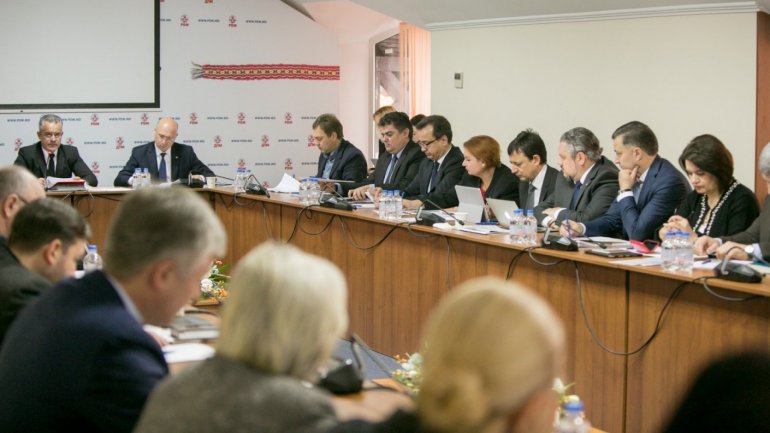 The Government's top party has discussed at this week's meeting the way state institutions are preparing for the cold season and exceptional situations that might arise from it, as well as what attitude PDM representative must take to solve all problems the citizens complain of.

PDM's spokesman Vitalie Gamurari, has earlier declared during a press conference that they reuested chiefs of institutions to be as responsible as possible in its administration, so that citizens will not have to encounter difficulties when the snow will decide to step in.

At the same time, Minister of Internal Affairs will come forward with alternative solutions to sanctions drivers that park in illegal spots.

"There is a lot of displeasure among drivers and citizens. The problem is felt at most in Chisinau, where citizens encounter cars parked illegally, while drivers have to wait for hours before an authority arrives to open a file and return their licence plate" Gamurari remarked.

For this, some changes are required in the legislation, the subject will following be analyzed at the Government and solved.

Read also: Gămurari: Call your language as you please, but use it to speak and not start political conflicts

At the weekly session was also opened the topic of changing the Constitutional language to Romanian, a recently active subject.

"There are many opinions and they don't match. There are colleagues who wish for the Constitutional language to become Romanian, there are those who oppose. In his tun, leader of PDM, Vlad Plahotniuc announced that the language he speaks is Romanian and regardless of how others wish to call it, the language must be spoken correctly" Vitalie Gamurari said, mentioning that they will leave this issue to be decided upon by their colleagues.

An important announcement was made by PDM leader Vlad Plahotniuc during the weekly session regarding a Government reshuffle, based on Ministers activity.

According to the spokesman, PDM's president, along with Prime Minister decided to finalize the evaluation of Ministers activity by the middle of December. The main criteria during this evaluation is the way each representative from PDM or a Party delegation in various state institutions have managed to synchronize their everyday work with the grave issues the citizens complained about.

Read also: Gămurari: News that Vlad Plahotniuc is investigated in Romania are false. Do not easily trust prisoners who decided they wish to be actors
At the end, Vitalie Gamurari spoke of the new manipulation campaign that appeared yesterday in the mass media, claiming that  Vlad Plahotniuc is criminally investigated in Romania. He wished to make it clear that it was a big fat lie and PDM's president is not prosecuted in Romania.
That complaint was made by inmate Veaceslav Platon, against Vlad Plahotniuc a while ago. Authorities from Romania had to register and check it, as stated by law and it is nothing unusual. As you can see, the claims proved to be false and had nothing to do with Romania. Therefore, if someone were to write complain against us, law enforcement will be forced to take the same actions. They will open an investigation to check if the statement matches or not. First of all the act is investigated and only then, officers decided if it is relevant to the case and the person must be pursuit" PDM spokesman explained.

Read also: DIICOT prosecutors: Vlad Plahotniuc is not investigated in any criminal file

He also said that Plahotniuc owns letters from DIICOT and Bucharest Court, dating June and August 2017, clearing him from such claims, being more recent than the document from April used by the mass media to manipulate.

The spokesman from PDM has recommended the institutions who spread the false news to read the document carefully and consult lawyers, in case they do not know of legal procedures.