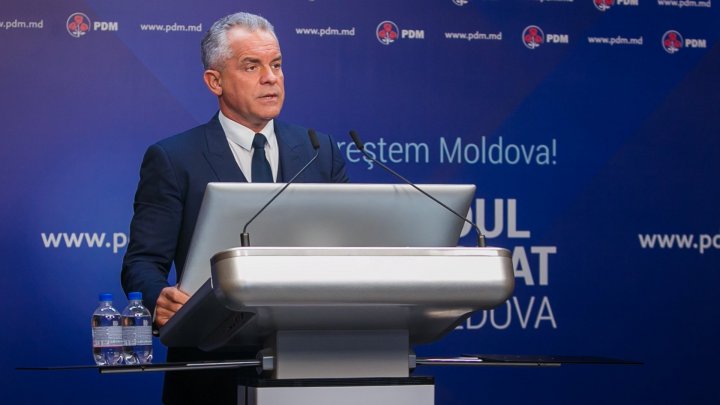 This campaign will depend on if our country will retain order, political stability, continuous economic grow or slide into chaos, poverty, riots. The statement was made by Vlad Plahotniuc, PDM chairman.

"In this cold weather, I'm glad to see you with trusts and willing to obtain a determined victory in the elections in February 2019.

We launched today an important campaign not only for us but also for country. Because this campaign will depend on if our country will retain order, political stability, continuous economic grow or slide into chaos, poverty, riots.

Therefore, we're obliged to the people how the works were carried out and what we did.

Let's call on their hearts and be rational, to show the differences between the electoral contestants and the Democratic Party team.

Citizens now could analyze what has been done in these three years of governance of PDM and what we might lose if others come to power.

What Republic of Moldova can obtain if we keep political stability, not if, but surely, by voting the Democratic Party of Moldova.

It's really important to discuss with people, to explain and present them our arguments. All will show you for whom you should vote to benefit well-being.

We're starting this electoral campaign with heads up, as we are talking facts, not just promises.

Together with PDM, government, councilors, local administration, mayors, we all achieved tangible results even in 2016, very few believed in our successes.

What the Democratic Party of Moldova in three years of government managed to do more than the previous governments.

We managed to make new roads in the whole country, increase pensions, salaries, we offered supports for the needy. We launched programs, First House program, we did lots of good things which we will persist in 2019 and in the coming years as PDM will remain in governance.

Our plans are ambitious because we want to build roads, more roads than we built until now, to increase more pensions and salaries, to support families, to create new jobs with competitive wages.

In our electoral program, we included majority of problems citizens requested in our meetings.

Therefore, we're assured that our governance program is written by voters, our citizens because they made it.

The road we're been through these three years is the best way and PDM has a united family and is capable of big works.

We're the team who work with prime minister Pavel Filip and parliament president Andrian Candu and minister, deputies and we did everything for people.

Anyone else can say they have worked as much as we do? And we're eager to continue work for Moldova.

Everyone need to know that Moldova no longer afford to experience again different experiments and slide into poverty.

Look at what is being done on the right or on the left, politics, opposition doesn't have governance program and is already lamenting, and citizens need to understand this behavior, because they can't govern and make successes in the country with mourning but with disciplines and concrete actions.

Thus, after February 24th elections, governance mandate needs to be maintained and the country must retain its governance and stable development.

We trust our own forces and we want the choices as free and as accurate as possible. Once again, I appeal to all candidates included in election race no matter what parties they present, to refrain from forgery and manipulations, to show respects for all electoral competitors and let voters decide freely and exercise their right to vote democratically.

Dear friends, in this campaign, we need to explain to people that PDM is the only party that can maintain the country's order and economic growth as how Republic of Moldova is today.

The hardest years passed, we have undergone numerous reforms, enormous reforms for us and for people, therefore, better things already came in 2019 and the coming years.

Citizens expect us to keep good facts, thus, let's meet their expectations, win this election with transparency and fairness, and then proceed to work and new results. I trust the Democratic Party of Moldova team and I'm sure of the PDM victory. Victory! ", Said Vlad Plahotniuc, PDM president.

PUBLIKA.MD recalls that the electoral campaign for the February 24th parliamentary elections started today. It will last until election day. The vote is based on the mixed voting system. Thus, 50 MPs will be voted on party lists, and 51 MPs will be elected on uninominal constituencies in one round.