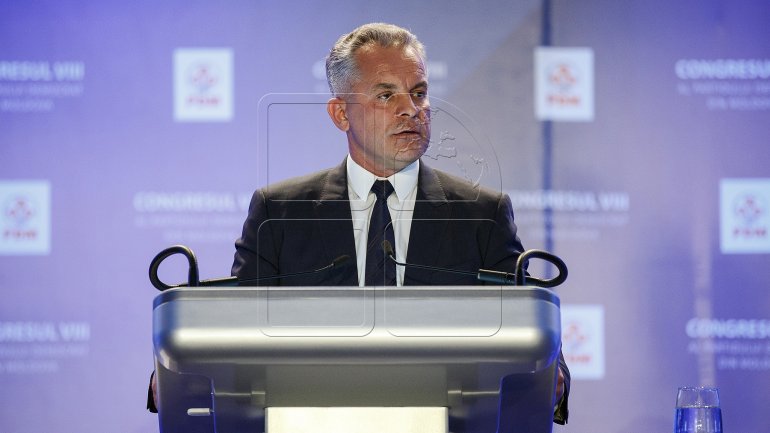 Foreign partners of the Democratic Party welcome the election of Vlad Plahotniuc as the party leader. Officials are convinced that through its ability to organize and manage the proposed projects he will strengthen the party he leads, and the country.

"It was always that party that keeps stability, keeps balance and deals with people's lives. I know Mr. Vlad Plahotniuc very well and I know he has the capacity to be a party leader. To keep united a very good team, a team in which are the prime minister Filip and Parliament president Mr. Candu, Mr. Lupu, and everyone I know for a long time. A lot depends on the PDM team. The way they will convince people to be with them" said former prime minister of Romania Victor Ponta.

Officials said that PDM always had professional leaders. And the next president of the party has the ability to bring a new breath in consolidating and developing the party and the country.

"I noticed the professionalism of PDM leaders from the beginning. If we look from the historical point of view, there are four leaders who are responsible for the success of the party. The first is Dumitru Diacov, an actor of transformations. Marian Lupu is a man of new visions and had an important role in the democratization process in Moldova. Vlad Plahotniuс is also a man of new visions in regard to democracy and Andrian Candu represents this process in Parliament" said Secretary General of the Socialist International, Louis Ayala.

"What PDM does now for Moldova's integration into the European Union is exactly what is needed. The party must, first of all, to strengthen the state. Moldova cannot join the European Union if it is divided into several territories. And the economy must be strengthened in order to know for sure how much money you have and how you can use them. Moldova must be a developed country in terms of democracy" said Sonja Lokar, representative of the Women's Organization of the PSE.

In his turn, Vlad Plahotniuc said that he will focus on modernizing the party in order to become a party that promotes the interests of citizens rather than geopolitical ones:

"We have in Moldova various parties: pro-Russian, pro-Romanian, pro-American. These forced divisions of the society leads population to hysterics and creates for everyone an atmosphere of total insecurity in the country. In Moldova, the electoral campaigns in particular, and often after them, you feel that the Americans, Europeans, Romanians, Russians are fighting each other. But where are the Moldovans here? What is the Moldovans party? What is the party that people can report to walk confidently towards it, knowing it will solve their problems. This party it must be the Democratic Party".

PDM president emphasized that the political party must position itself as a party that provides tangible results for the benefit of the people.