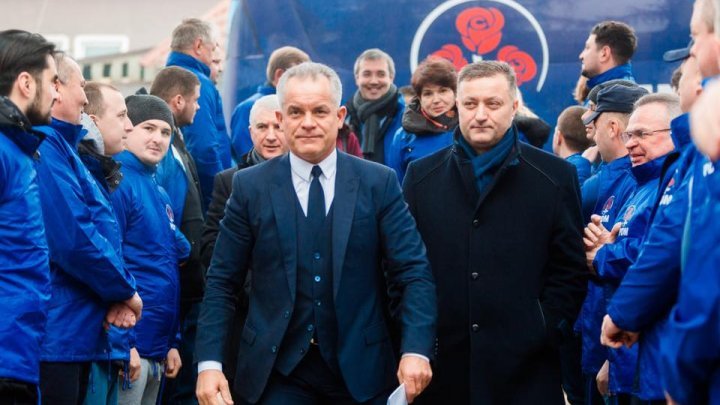 They discussed with the people of Nisporeni district about their priorities and tried to find solutions through concrete facts. The Democratic Party delegation, headed by Vlad Plahotniuc, PDM leader and candidate in the Nisporeni constituency, arrived yesterday at his hometown, where the Democratic President was greeted with a lot of people.

On the way to Nisporeni, the Democrats discussed various projects for citizens, including the repair of Chişinău-Leuseni road.

"This road is included for elaboration of project. Given that the Belarusians also have good experience on the concrete roads, we see different possibilities, the feasibility will show how we do with concrete or asphalt and after that it can be included in the financing "said Anatol Usatîi, State Secretary at the Ministry of Economy.

The first event on the agenda was a meeting with postmen from Nisporeni district. People appreciated the concrete facts of democratic governance.

"Now it's improved. I can work on the computer. I can handle at my age", said Maria Luca, a postman.

PDM candidate in the Nisporeni district had a meeting with the teachers and students of "Boris Cazacu" high school, young people who are interested in the first poll they will attend.

"Democratic Party is the first one to vote for reduction of deputies, I want to know some arguments".

"We are inspired by the surveys and what citizens requested us. In fact, we only work for what all you want", declared Vlad Plahotniuc, a candidate in the constituency no. 17, Nisporeni.

At the end of the day, the PDM team met with residents of the city.

Valeriu Agheorghiesei, this young man had to use wheelchair as result of an accident. Even though, he managed to build a house, however, the road is still hard to pass for him.

"I don't have access to my house. Another problem is lack of water. I will organize wedding this summer and I wish to invite you to my wedding", said Valeriu Agheorghiesei, a resident of Nisporeni district.

"With my colleagues we will find solutions or I will come to build the road there", said Vlad Plahotniuc, a candidate in constituency no. 17, Nisporeni.

Other people expressed their support for Vlad Plahotniuc.

"We're united people, we want a country and a party. We will vote, absolutely for Democrat Party.".

In turn, Vlad Plahotniuc said it would be a pride for him to represent the people of Nisporeni in the future Parliament.

"It will be gratitude or an appreciation of things we have done here, in Nisporeni, that I can say, in the next Legislature, I have support of people from Nisporeni", said Vlad Plahotniuc, candidate in the constituency no. 17, Nisporeni.

The electoral delegation of the Democratic Party started on January 26th. Until the elections, the Democrats will visit all the country districts and discuss with our people about their problems, their wishes for the next government.