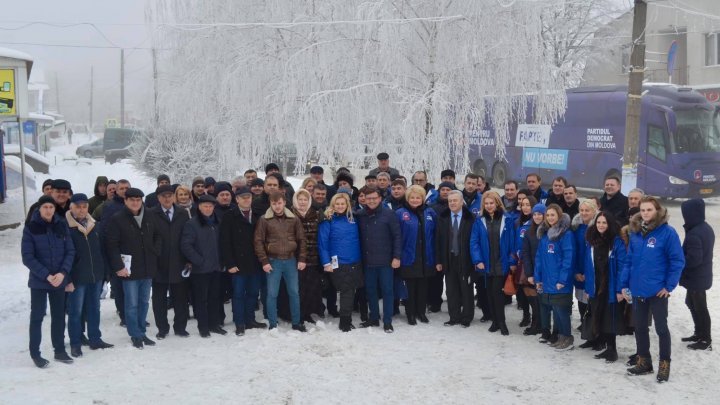 In Ocniţa district, the Democratic delegation, headed by Violeta Ivanov, a PDM candidate in the elections, reached 25 localities.

200 citizens came to the meeting with Violeta Ivanov in Vălcineţ village.

"People who retired last year received almost twice the pensions compared to those 15 years ago", a woman said.

"We had to create the right formula so that the mechanism worked correctly. We presented this formula and received feedback from the territory. Afterwards, we improve it", said Violeta Ivanov, vice-president of the PDM.

Then, the Democrats went to Ocniţa city and PDM candidate on Ocniţa constituency, Vadim Lesnic met with 500 citizens.

"Let's review achievements Democratic party made during a year and compare with 27 years of governance by the opposition - nothing.

From the good roads rebuilt to First House project that offers young people buy their own houses, to pension reforms. We believe, these are huge effort", said Vadim Lesnic, PDM candidate on Constituency no.2, Ocnita.

Other members of the Democratic Party went to the villages in Ocniţa district where they discussed the problems of the locals and identified solutions.

"We had a very good meeting with the locals who said they felt government's care. They said they wanted to move kindergarten from the current location to the new one. Candidate on uninominal constituency and I, as a candidate, assumed that we will intervene and tackle this problem", said Ruxanda Glavan, PDM candidate on the national constituency.

"Everyone is interested in the continuous payroll, including legislation, remuneration in budgetary system, as well as pension increase. We outlined several activities for the near future which will be after elections, if we retain power in government", pointed out Igor Vremea, PDM candidate on the national constituency.

People say PDM team is one that has fulfilled its promises.

- We support the Democratic Party team.

- How do you appreciate their reforms?

- They are very good.

- They are bravo! Roads are rebuilt as they promised. I see they have done a lot.

- We appreciate gift boxes to our new mothers.

The PDM delegation will reach all localities in the country to meet the voters.