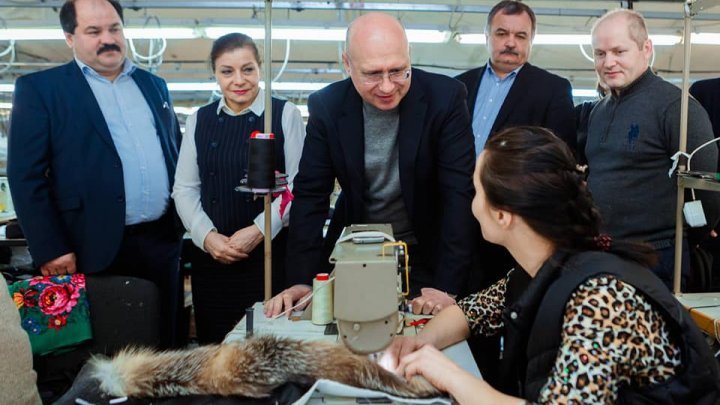 Employees of a factory in Soroca are very proud that clothes they sew are labelled by international brands.

The 600 people enjoy the fact that thanks to foreign investments they have a well-paid job in their country.

"I've been working for around 10 years. It's great. We have jobs and we stay next to our kids, our parents", said an employee.

During the meeting, factory employees had the opportunity to discuss with PDM members about the issues they face.

The prime minister also met with workers from the Red North West. Since 2018, they have meal vouchers worth 35 lei a day.

"Each of employee of the enterprise could save a bit, it's a surplus. We can spend that in different supermarkets", said one employee.

PDM members went to the Soroca district Hospital to visit four renovated sections. Around 8 million lei has been allocated for such works in the past three years.

"For the first time since 2003, in 2018 we had the opportunity to pay workers' awards, to increase the salary according to the Government Decision, 20 percent to doctors and 10 to nurses, and even prizes for counter-payment services that doctors provides them, "said Angela Rusnac, director of the Soroca district Hospital.

"Together with you, we have built up health centers. We are now at a new stage. This is already a history, but now we are at a new stage. This has been worked on in these three years. Now we have opportunities to carry out everything initiated so far", said Victor Său, PDM candidate on the constituency no. 7.

Between 2016 - 2018, in the Soroca district, 51 kilometers of road were repaired and 10 localities were equipped with aqueduct. Other 14 villages will benefit from tap water, and a sewage system will be built in five localities. Also, a purification station is to be made.