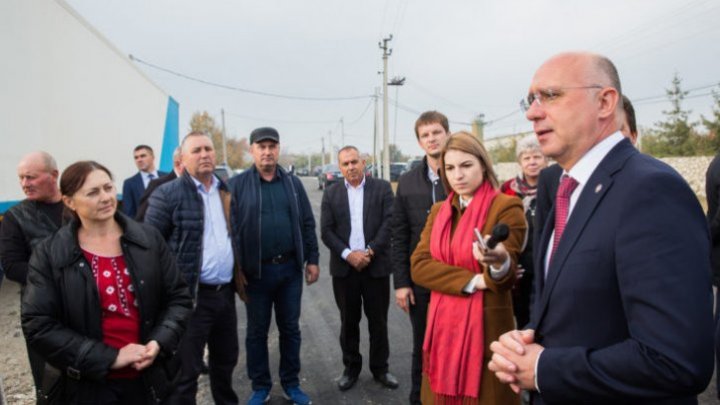 Road repairs, construction of aqueducts and sewers, attraction of investments are some of priorities proposed by PDM candidate on constituency no.20, Pavel Filip.

Together with PDM team, he visited Straseni city on PDM caravan. The candidate met with hundreds of citizens to know their expectations.

30 kilometers of road was repaired in Straseni thanks to program Good Roads.

Pavel Filip pledged that 70 kilometers of road will be repaired by the end of this year.

PDM candidate observed the streets in Straseni to ensure if they're ready to carry out new projects.

"When we work, we have duties, we have salaries. We will employ more people. This's the way we proceed the works. I hope we will develop this infrastructure so that we all benefit from projects", said Pavel Filip, candidate on constituency no.20.

Chief of society Straseni roads says that the company has grown considerably thanks to the program Good Roads. Turnover increased threefold to 146 million lei in 2018. This enabled wage increase.

To attract investments is another priority of candidate Pavel Filip. He discussed with employees of a wine factory in Straseni. Although the company is small, its wine reaches couples of countries over the world.

"The more jobs we create, the higher competition it will be. Then companies will find ways to seek employees which means they will increase salaries", said Filip.

"Everything done in the country was passed from Government, with the help of government, with involvement, with dedication of candidate you have now. I don't boast to say that he's the best candidate. You realize that we place the best persons in government", said Vlad Plahotniuc, president of the Democratic Party of Moldova.

People of Straseni appreciated Pavel Filip's work as prime minister, being convinced that he would represent their interests in the next Parliament.

"I've been here for 50 years. I've seen considerable changes in the past three years."