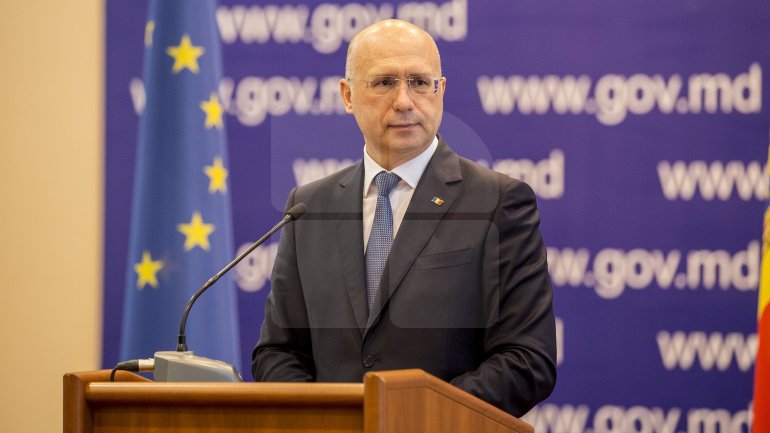 Moldova is exposed to aggressive Russian propaganda, however, government has succeeded in regaining a high popularity and support for pro-European course. This was statement made by Moldovan Premier Pavel Filip in his interview with European press Euractiv and was also mentioned in global press agency AFP , ahead of Eastern Partnership Summit in Brussels on Friday.

I think that for the times in which we live hybrid threats are a normal notion, because not only tanks represent a threat, it’s even worse when you are exposed to propaganda. In Moldova there are many Russian speakers, for historical reasons, and via Russian TV and radio channels we are exposed to propaganda which I would qualify as rather aggressive. This also influences the popularity of the EU among our citizens. But despite this propaganda, we have succeeded in regaining a high popularity and support for our pro-European course.

Before, The Head of Executive emphasized there are good prospects for finding a solution to the Transnistria conflict, one of the post-Soviet frozen conflicts which have caused enormous harm to the region’s populations.

In my view the time of the frozen conflicts has passed. There was a period when we were at an impasse. I’m glad to inform you that last year, after a period of several years of German chairmanship of the OSCE, we managed to resume the negotiations in the 5+2 format [Russia, Ukraine, the OSCE, Moldova, Transnistria, as well as the USA and the EU]. I must say that we have ourselves deployed extraordinary efforts and this year, we register progress. Only last week I participated in an inauguration event of a bridge linking the left and right banks of the Dniester river. This is a project which had been impossible since 1992. On this occasion I have held a very short discussion with the so-called leader of Transnistria and in my view there are now perspectives for finding solutions to several problems discussed over the years, in the first place solving the problems of people living on this territory, while next year we could also try to identify a political solution by providing a special status to this region.

From this perspective, I’m reassured by the language that is being negotiated for the EaP summit declaration. For us, the involvement of our European partners is very important.

In order to cope with Russian propaganda which Prime Minister Pavel Filip described as aggressive, the official urged the EU to send a strong political signal to help combat that propaganda from Moscow, wrote AFP.

"It's a courtship process -- the more positive messaging, the more we date, the more our society is resilient to messaging from Moscow," he told reporters in Brussels.

PUBLIKA reminds that Premier Pavel Filip along with other Moldovan officials are attending the 5th Eastern Partnership Summit in Brussels.

The summit will discuss how to further strengthen cooperation in the four priority areas agreed in Riga: stronger economy (economic development and better market opportunities) stronger governance (strengthening of institutions and good governance), stronger connectivity (enhancing interconnections, notably in the areas of transport and energy) and stronger society: increasing mobility and contacts between people

Yesterday, Filip met with multiple European representatives and signed a memorandum for a 100 million euro assistance from EU to Moldova. The macro-financial assistance program for our country foresees 40 million euro given as grant and 60 million euro as loan. They will be transferred in 2018, in 3 equal tranches.

The interview with Premier Pavel Filip and his quotes were also published on other foreign press such as kyivpost, france24.