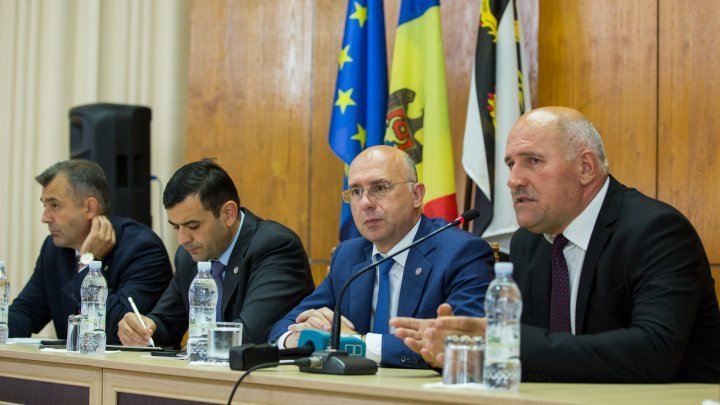 Prime Minister Pavel Filip, together with the leaders of the key institutions in the management of the economic environment, had today a meeting with businessmen from Leova district to jointly assess the investment climate in the region.

In the talks, the prime minister appreciated the diversity and specificity of the business developed in the Leova district, where over 8,000 small and medium enterprises are registered, most of which are agricultural households. The Prime Minister reiterated that the Government's efforts are aimed at improving the investment climate in the country and opted for a constructive dialogue with the entrepreneurs in the region to find out from the first source on which sectors the Executive may intervene to facilitate entrepreneurship.

In this regard, the measures already undertaken by the Government - the establishment of the moratorium on controls, the reduction of the institutions with control functions and the number of permissive acts from 416 to 150, of which 29 are released within the Single Corps, recently released .

"It is important that these documents are offered under comfortable conditions, the documents will be released to the economic agents that a single act - the identity bulletin is necessary," the prime minister said.

At the same time, fiscal-budgetary policy was approved for a period of three years and the Labor Code was improved. In order to support the young people who launch business in agriculture, subsidies will be granted in advance, this year being allocated 45 million lei. Pavel Filip said that there are other initiatives to improve the business environment.

Discussion framework was used by economic agents to notify authorities of the difficulties they encounter in their work. Thus, the lack of the domestic market for agricultural products, the problems of cleaning up unprocessed agricultural land, the excessive taxation on the import of high-quality agricultural techniques, the deficiencies in accessing European grants, but also the losses caused by the disconnection of the economic entities from the electricity .

The head of the Executive said that the constructive proposals put forward by the entrepreneurs will be evaluated, including on the platform of the Economic Council to the Prime Minister, for the elaboration of initiatives that would solve the problems raised.