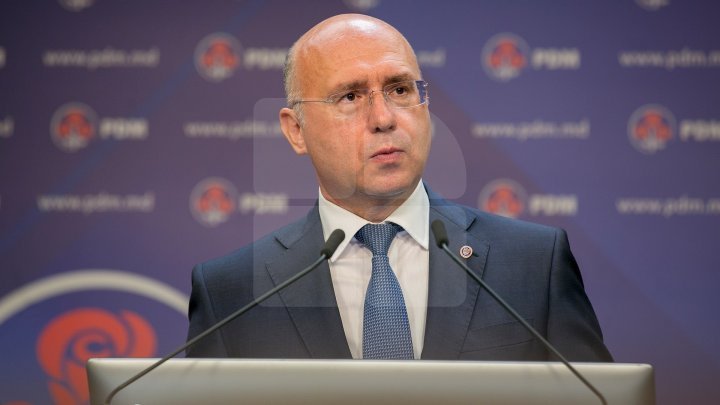 Premier Pavel Filip has talked about tax reforms and business environment at the weekly meeting of Democratic Party of Moldova.

Emphasis is placed on improving business environment by voluntarily declaring real estate and other assets by citizens, forgiveness from the payment of penalties to those who have older debts to the state, and the limitation of high pressures on the business environment, from the part of the power organs with control functions.

"Another problem is the presence of financial resources and undeclared assets over several years. One of solutions is the voluntary declaration of these assets for the money funds, and the money will be deposited in the financial institutions until December 10 or 20, a concrete date is to be set and a 3 percent tax will be paid.

I have to point out that it is only about tax invasions and in strict accordance with all international rules, so we can be sure that this money is clean, not from crimes.

I say very clearly that public officials after 2009 don't benefit from this voluntary declarations such as presidents, deputies, prime ministers, judges, prosecutors, directors and deputies of the SIS, CNA, Customs, FISC, NBM, as well as all the heads and those who benefited from fraudulent loans from troubled banks such as Investprivatbank, Banca de Economii, Social Bank, Unibank, UniversalBank. We comprehensively included these provisions that we assure that we don't have fraudulent money or money from Billion Theft or other illegalities. We need to monitor this thing carefully so that this won't happen again. Then, we will have money into economic circuit.

Regarding business environment, a problem we're talking about is short period for repatriation of the currency, a problem faced by all exporters.

One solution would be increase from 2-3 year of limited deadline for repatriation for external contracts and a 2-fold reduction for unspent means from 0.1 percent to 0.05 percent per day. It also reduces from 40 to 18 fines for non-repatriated funds within the set deadline. As a result, business people will enjoy relaxation and a more comfortable environment.

They all faced this additional problem because the one who delivered the goods did not pay off and the money did not return, you were still subject to fines and very strict rules of fact.

Another issue concerns the fines and penalties which have not been paid by the economic agents for years, and this package will be accompanied by a cancellation of the fines and penalties for late payment of the public and national budget, provided that the taxes are paid to a certain date and will be applied to entrepreneurs, individuals and businesses.

Another issue I have been talking about over time is the high pressures on the business from the power organs with control functions as well as the abusive preventive arrest.

There has been much talk of us in society, and now we have come up with an initiative to reduce these pressures on the business environment, which would mean that a series of crimes will only be investigated by prosecutors and only after the control bodies .

The preventive arrest will be applied in a narrower manner and with very clear rules.

The searches will be subject to more severe rules, which means that on-the-spot control will only be done after the documents are checked in the office.

The powers of the SIS related to the investigation of economic crimes will be limited.

Legal liability will be imposed on officials who do not comply with the deadlines or unjustifiably refuse to grant permissive acts.

It also clarifies the meaning of a fraud offense", said Pavel Filip, Premier of Republic of Moldova.