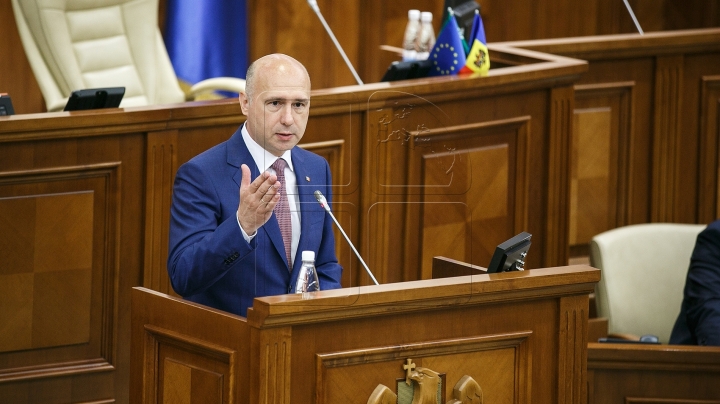 The censure motion presented by socialists, communists and liberal-democrats is flippant, demagogic, cynical, being a political show on the eve of the electoral campaign. The declarations were done by the prime minister Pavel Filip, who came to today’s meeting of the legislative, which did not take place because of lack of quorum.

At the same time, the prime minister stressed out that the authors of the motion are manipulating when they say that the Government put the bank fraud on people’s shoulders. Pavel Filip mentions that through those who are supporting the motion is the PLDM deputy Chiril Lucinschi, one pf thew beneficiaries of the theft at Banca de Economii.

The prime minister Pavel Filip had to have a speech at the meeting, but because of lack of quorum, it did not take place. Below there are fragments of his speech:

I want to start by saying that the opposition’s gesture to present a censure motion in the context of Government taking the responsibility in front of Parliament is a constitutional one.

If the debates are good for democracy, still, I cannot abstain from remarking that the motivations of the gesture of Mr. Dodon and his new supporters, from the old political left and the so-called political right, are toxic for the prosperity of the citizens and for the European path of Moldova.

Regretfully, I have to say for the second time in 8 months: the motion presented by PSRM, PCRM, PLDM is a totally careless, demagogic and cynical one, starting with its content and finishing with the moral quality of the subscribers.

Coming to the pages called unjustifiably as censure motion, I want to define clearly who and why called us here, wasting people’s time and money without coming with solutions. There are interests some of you are using because you are here. I will refer now to the interest of PSRM and Mr. Dodon. The two main reasons of his group are the revival of his electoral campaign and throwing back the European perspectives of the country. I would like to be clear: he is not interested in the economic and social situation of the country, but in the presidential elections, as it is explicitly demonstrated on the second page of the motion. And as we have seen before, he is an expert in scandals and doing shows, not in leading a country.

I was looking in this motion for at least one measure, one solution for debates. I did not find one. It is even weaker that the one from the summer. No solutions, no good-faith and no common sense. Zero.

I know that in this audience are some people who have almost hysterical reactions because of some projects, because they see their political end. For them the only way to finance their presence in politics was by stealing money through a weak and available banking system. Yes, I think that those who are screaming the loudest in this hall are those who participated at the robbery of the billion.

To criticize the governing for trying to solve problems generated by the subscribers of the motion is ridiculous and cynical. But I have seen that some of the candidates to the position of president are choosing to attack the image of Moldova abroad, just to gain some points of political PR.

In the motion you are accusing the wrong direction of the country and the fact that the Government is a threat to the nation. The Agreement with IMF is a threat for population? The trust of European partners and the support, including the financial one, we are receiving are a threat to population? The support of American partners who are advising us to continue what we started is a threat? You cannot say this even jokingly, let alone in a document signed by a pretentious political leader.

The nation has the right to know that you are deforming the reality like in the Armenian radio jokes.

Mr. Subscribers of the motion, I say this to you: the only threat for Moldovan nation is that the country to go into your hands. After your election will be the end of the world.

I have another request: don’t lie to people with the false idea that they will have to give money for the stolen billion. The Government and the authorized institutions are already acting to recover the defrauded sums from the three banks. People have to know that from the so-called “billion” will be deducted the amounts which were and will be recovered, including through the investigation of international company Kroll.

I ensure the nation that the Government will do anything so that the thieves from BEM will go to jail, their fortunes will be seized and the stolen money to be recovered, so that the citizens will not have to suffer more than they had because of some irresponsible politicians, who treated BEM as a party piggy-bank.

Therefore, I consider the presented motion a ridiculous, populist and cynical one, through which the thieves want to cover their tracks. I repeat, a part of the motion’s subscribers and their parties are responsible for the BEM robbery. They have to give declarations in front of investigators and to return the money to the nation, not to make electoral shows.

Dear parliamentarians, here is the Parliament of Moldova, not the PSRM Congress and neither the secret meeting of PLDM, where probably they were deciding how to share the money from BEM. It is not the PCRM meeting where one person decides for all. Here is an institution where you have to represent those who chose you. That is why I am saying that we do not have any reason to vote a careless text. It is not only full of lies and misinformation, but also without imagination: when trying to criticize the Government, PSRM, PCRM and PLDM could not give more than 2-3 pages. You cannot vote the plan of a group of interests which has four toxic interests:

1. The conservation of accumulated fortune from the stolen billion.

2. The abandonment of European path, re-introduction of visas for Europe and stopping of all supports from IMF and European partners.

3. The abandonment of de facto independence of Moldova.

4. The imposition of the principle “each for himself” and the transformation of Moldova in a Wild East.

Say yes to Civilized West, not the Wild East!

Therefore, I invite you to decline the unnatural electoral program of PSRM, PCRM and PLDM. I ensure you that we will not allow for this dark scenario to take place. The Government has a clear plan and goal – the European integration and a better life for each Moldovan citizen.

Moldova has a future, a prosperous and European one.”

PUBLIKA.MD reminds that the socialists, communists and liberal-democrats have presented a censure motion against the present Government. This happened after the Government took the responsibility for seven draft laws. They are documents connected to the strengthening and cleaning of banking sector and those on the state budget. The prime minister mentioned that the Government taking the responsibility on them is a very important decision, and the documents were agreed with the International Monetary Fund. If not, Moldova could have lost three billion lei of loans and grants.