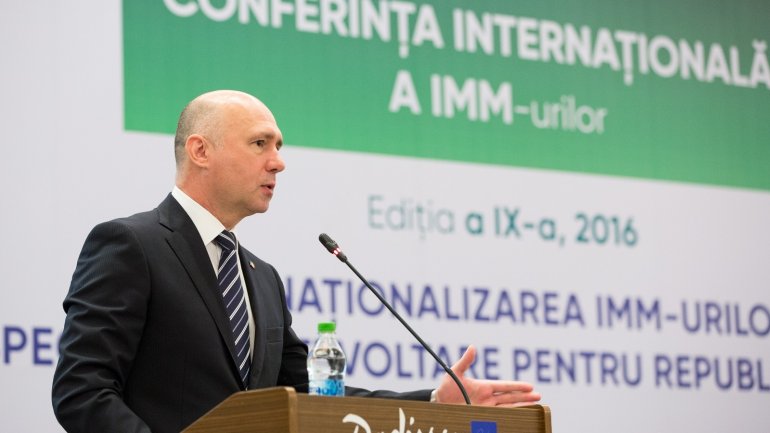 Prime Minister Pavel Filip has participated today at the opening ceremony of the ninth edition of the International Conference of Small and Medium Enterprises (SME) 2016, having its motto "The internationalization of SMEs – development prospects for Moldova".

In his forum speech, the Head of Government outlined the SMEs’ significant role in the national economy development. "SMEs are the main generators of revenue to the state budget, jobs and motors of innovation and development" , said Pavel Filip.

Similarly, the prime minister referred to Government’s measures to stimulate business development, stressing that they would increase macroeconomic stability and stimulate the employment opportunities for citizens. "Since the sector is still young and fragile, it needs a lot of support and care from the state, through fostering institutional, fiscal and order regulator policies," the prime minister said.

In the context, Pavel Filip said that there had already been developed and adopted by the Parliament a new law on small and medium enterprises, promoting the sustainable development of SME sector and encourage the carrying out of development and innovation. Apart from that, since the beginning of the year, Government has undertaken a series of actions to improve the business environment including reform of state controls, reducing the number of permits, cleanliness in departmental acts of the Customs Service, unifying reports, replacing the operating licence with notification of commerce.

For the purpose to encourage small business development in the village, at the event three young entrepreneurs presented their business ideas, trying to convince the conference audience to contribute to their implementation. At the same time, the winners of the national contests "Best Entrepreneur of SME sector" and "SME – model of social responsibility" were awarded.

Moldova’s SMEs represent about 97 per cent of all companies. Their share in GDP is about 32 per cent and they provide working places for 55 per cent of the total economic sector employees.
AFLĂ imediat Știrile Publika.MD. Intră pe Telegram