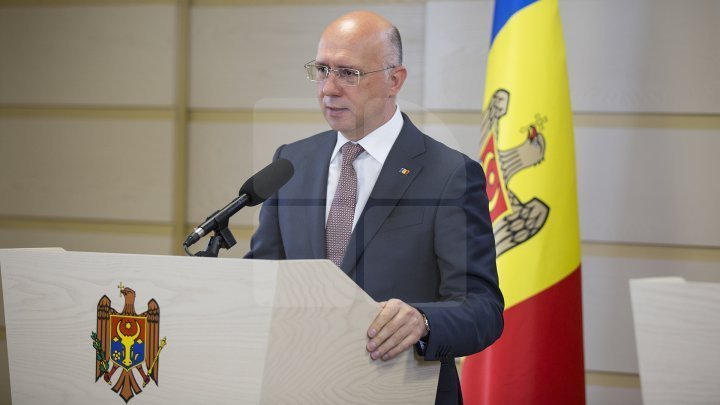 Actual situation of Republic of Moldova is the result of more than 25 years of governance. Prime Minister Pavel Filip has answered to the accusations that the Government fails to strive to improve the demographic situation in the country and to increase the allowances for people with special needs.

"The governance for 25 - 27 years has resulted in the actual situation of Moldova. Let's seek for the solutions to the problems, not create conflicts between us now. There is not another solution than unite in a large reform agenda. It's not enough just to carry out business reforms to create jobs. Young IT workers who have an average salary of 17,000 lei leave the country because they want qualitative medical services and much more. I took three domains that build a state: the rule of law, education and infrastructure. Then I start all things that can be implemented to keep our citizens in country and call others to go home", said Premier Pavel Filip.

The reaction of Premier came after PCRM deputy Elena Bodnarenco had criticized the Government for pension reform, saying that the increases are insignificant, especially for people with special needs.

In turn, the prime minister said that all those who come up with bill to raise pensions do not indicate the sources for these increases.

Moreover, Filip asked the PCRM deputy why she did not act when her party was in power, reminding that in 1999 the pension calculation formula was changed, an action that did not justify the retirees at that time .

"If there was only one solution to solve this problem, it would be very simple, just as we are criticized because people in Moldova go abroad. I see a direct link. If people go abroad, the demographic situation improves there and gets worse in Moldova.

People will leave Moldova as long as we do not offer wages, we will not build roads, we will not have a qualitative education, we will not provide quality medical services. There is no wand to solve this issue in one night.

It is true that many initiatives that come from the opposition in the Government are rejected. Let me tell you about this. Those initiatives are populist because the financial sources need to be identified when you request to raise wages, pensions. That is why we start from the financial capacity of the Republic of Moldova. To spend money, you have to learn to win, and we are focusing on this.

Regarding the pension system, I don't boast of this system. I only have a question for your party: Why didn't you implement what you request now when you were in power? You knew that in 1999 the formula for calculating the pension was changed, an act that has wronged all citizens who retired after that period.

This injustice lies in the fact that the money that paid them in the social fund and when the pension was calculated was not valued. These people were simply punished unjustly. That is why the essence of this reform was not to increase the pension, because in order to increase the pensions you need money, but it was to bring fairness and to make justice for all the people who were wronged. We have reviewed the pension calculation formula. Therefore, those retiring in 2017 retire at least 30 percent higher than they would have gone into the old formula.

We have had a period of revaluation of pensions, because money is needed for this. Thanks to our increasing state budget and social fund, we managed this revaluation.

Once we know that everyone has the correct calculation formula, if you have the possibility, you can raise your pensions. Do not think you know the problems better than we do. I know that a person with special needs can not live with 800 lei, I know that a nursery pedagogue can not live with EUR 58, a child is a little nourished with one euro. I know much better about the problems that are in the country. People today are right when they do not come with appreciation, because they don't have good welfare, but we are laying the foundation, "said Premier Pavel Filip.

Critics also came from PSRM deputy, Vlad Batrincea. He accuses the government of finding no solution for Moldova not to resort to foreign funding.

"What would you do without external financing? The government did not find the solution to use its own money without external financing. The EU Enlargement Commissioner said very clearly that the Republic of Moldova is not on the EU's agenda as an extension in 2025. This means with European people that the European process for Moldova is over, "PSRM deputy Vlad Batrincea said.

"Regarding the external financing, it is a natural process, I want you back in the beginning of 2015. After all the crises, I did not other methods for Moldova, we should have borrowed to solve the issues.

If you have magical solutions, please pull them out. The economy has revived. And the external debt, which does not exceed the limits, will decrease.

About European aspirations, mistakes were made but now we had constructive discussions in Brussels because that was relationship.

There is something I'm always surprised. I found more constructive approaches in discussions with our partners than with some representatives of our political class. I see more concern for Moldova from them than from politicians in Moldova.

This does not seem correct to me. It is not frozen macro-financial assistance, interpretations occurred. You're not happy, that money goes directly to the state budget.

I assure you that this year the 2nd tranche will also be disbursed. We want to build a country based on EU principles and values. I assure you that Moldova will become a member of the EU. Until the end of this mandate, the European path will become irreversible, "Prime Minister Pavel Filip said.

PUBLIKA.MD reminds that Prime Minister Pavel Filip has today presented Parliament's Government Activity Report for 2017. Pavel Filip talked about the developments over the past year and pointed out the issues that the Executive's efforts are currently focusing on.