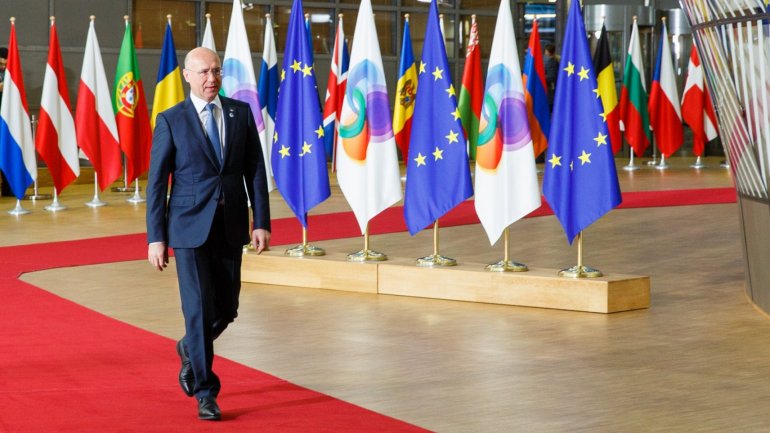 Prime Minister Pavel Filip has declared within the fifth Eastern Partnership session that Republic of Moldova remains confident to realize the reforms and Association Agreement.

The official claimed that authorities from Chisinau, in collaboration with EU, are concentrating to identify new sources to develop economy and stimulate big and small business,as well as attract investments.

At the same time, Republic of Moldova targets initiatives, such as removing roaming and developing the digital market, modernize transport and implementing energy projects.

Prime Minister mentioned that the Partnership is a successful one, while today's Summit, is a good opportunity to analyze common achievements and establish future aims. In this context, the official claimed that it is crucial for PaE to regain its political importance, the one it had at the beginning and generate new projects.

"It is important to revive it, think strategically, to have the courage pursuit big ambitions. Of course we wish for every Summit to think ahead and discuss visions, over calculations we do at the moment" Pavel Filip declared.

Prime Minister has also urged European officials to maintain their political pledges and implicate in relations with eastern partners.

"It is a crucial period for us, filled with difficult reforms and unpopular decisions. The presence of EU in our regions is important. I believe the EaP to have the best lands from the whole Europe and with a bid of help, they can bring rich harvest" Pavel Filip added.

Chief of Cabinet of Ministers has specified that positive messages from EU are encouraging authorities from PaE to move further: "An European future for our citizens is our country's project. It is important to think of our aims and perspectives within Europe."

The official also mentioned Republic of Moldova is viewing the situation as realistic and pragmatic as possible.

"We still have many term to finish in the chapter of rights and democracy consolidation, promoting social and economic reforms. Along those complex processes, we must accentuate initiatives that will bring specific results. In the end, the beneficiary and the one who evaluates those transformation are the citizens" Pavel Filip explained.

At the end of his speech, Prime Minister has accentuated: "We strongly believe in democracy and law. We are determined to see the end of this European track."