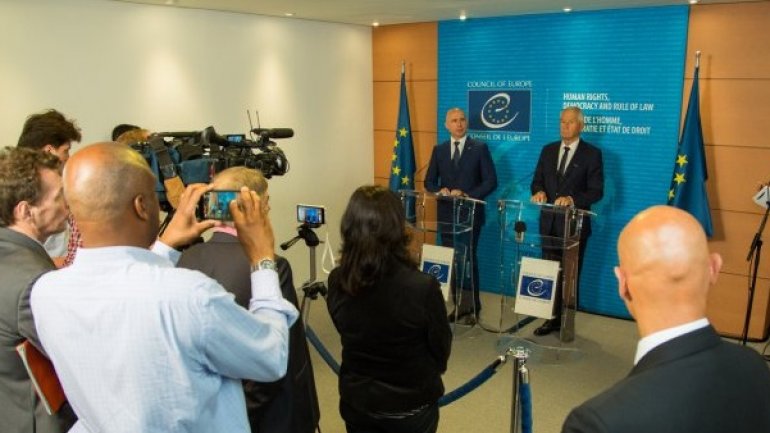 Prime Minister Pavel Filip, on an official visit to Strasbourg, has had a meeting with Council of Europe Secretary General Thorbjorn Jagland.

The officials exchanged opinions on up-to-date issues concerning Moldova’s cooperation with the Council of Europe (CoE). The sides discussed priority projects of CoE’s 2017-2020 Action Plan for Moldova, launched in Chisinau on 31 May 2017. Filip and Jagland also analyzed a framework of CoE-EU programmatic cooperation for the Eastern Partnership countries (2015-2017), which is synchronized with the provisions of the Moldova-EU Association Agreement.

In the context, Council of Europe Secretary General Thorbjorn Jagland appreciated the Moldovan cabinet’s efforts to carry out activities to identify additional financial means, facilitate the dialogue with the donor countries and prioritize the assistance projects included in the new action plan.

The sides also positively appreciated the initiative to organize the Open Day Moldova in Strasbourg in autumn 2017.

Another topic tackled by the officials at the meeting was focused on the reform of the electoral system. Thus, the prime minister appreciated the cooperation and assistance of the Venice Commission, stressing that a continuous dialogue would be ensured on this draft law: “We will attentively analyze all recommendations by the Venice Commission and will implement the solutions identified. The colleagues from the national competent institutions will continue working together with experts of the Commission on the recommendations, in order to ensure a good final law.”

For his part, Secretary General Jagland stressed the need to pay priority attention to the justice reform and fighting corruption. He assured the Moldovan authorities of the Council of Europe’s full support to this end.