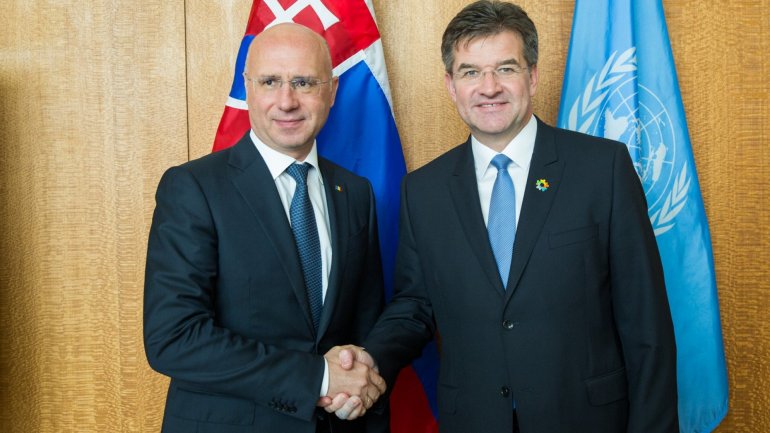 Prime Minister Pavel Filip has met, at New York, with President of the United Nations General Assembly for the 72nd session, Miroslav Lajcak.

Pavel Filip congratulated the official with his promotion to President of the United Nations General Assembly and wished him the best of luck in realizing his set aims. He also declared that Republic of Moldova fully supports the organizations reforms and their idea of promoting decisions that could improve humanities well-being.

During the meeting, the two officials have shared their opinions on the agenda that will be debated at this years General Assembly session. On this topic, Prime Minister has once again brought up the request of Russian troops withdrawal from the territory of Moldova: "We do not wish for a political conflict and believe that a correct and transparent debate during the General Assembly will also show us the right path to take to solve the Transnistrian conflict", Pavel Filip declared.

In his turn,  Miroslav Lajcak has spoken of UN's main aims: peace maintaining, solving the migration issue, promoting reformed that ensure long-termed safety and development. Prime Minister Pavel Filip agreed on the importance of those topics and assured the President of the United Nations General Assembly for the 72nd session that Republic of Moldova will have his back.