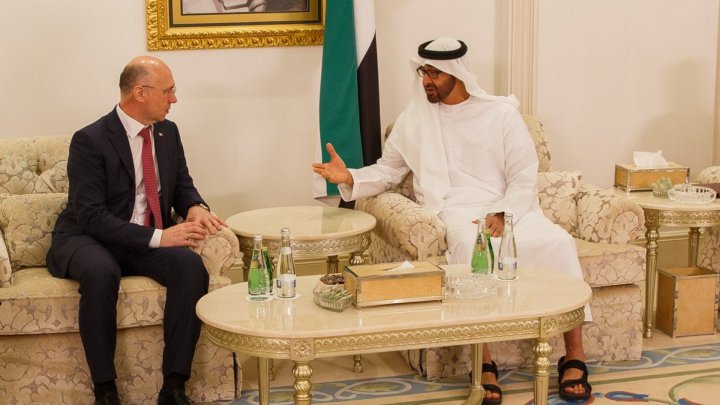 The officials spoke of the partnership between Republic of Moldova and United Arab Emirates and perspectives to intensify them, concluding that all the necessary stipulations for that exists.

In this context, were mentioned the multiple official visits from the recent period of time, as well as the more dynamic cooperation, through multiple new bilateral agreements.

Prime Minister mentioned that Republic of Moldova is interested in strengthening the relations between the two countries, including the creation of companies with mixed capital.

Pavel Filip invited investors from United Arab Emirates to visit our country, specifying that recently, reforms were made to support the development of business environment.

His Majesty Mohammed bin Zayed, has expressed gratitude for the removal of visa requirements and claims that United Arab Emirates supports Republic of Moldova's modernization, while investors from Emirates are interested in extending their businesses in our country.

For this, an official visit of Emiratis businessmen to Republic of Moldovan was suggested. The officials have confirmed the willingness to continue developing bilateral relations, using the existent potential to the maximum.

At the end of the meeting, Pavel Filip has invited Crown Prince of Abu Dhabi to visit Republic of Moldova.