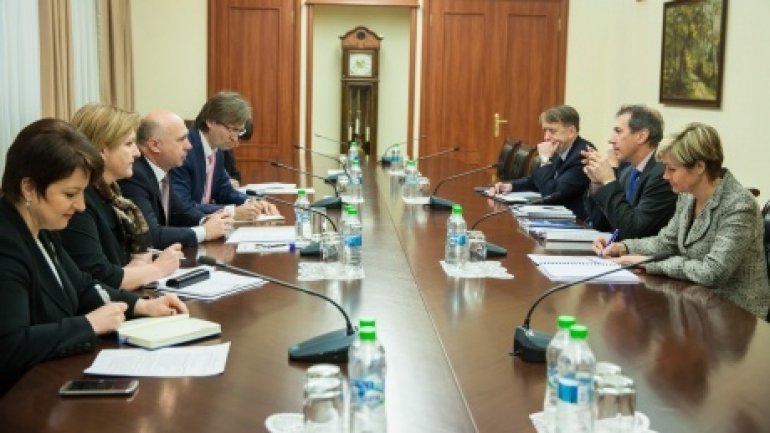 Prime Minister Pavel Filip has met with the World Bank vice president for Europe and Central Asia, Cyril E. Muller. The Premier sees the visit as a sign of trust for Moldova, stressing ‘trust’ has lately become a key word in the Government’s messages.

"We have carried out reforms these last months in order to regain the trust of our citizens and external partners," Pavel Filip said.

The official has expressed gratitude to the World Bank for the steady support provided to this country, mentioning this assistance is harmonizing with the Government’s priorities.

"The World Bank has been and is one of Moldova’s key partners, providing essential contributions both in the public and private sectors. Even more important for us is the support in drafting policies," the Prime Minister stated.

The Premier has pointed out the reform of the State Chancellery meant to make the public administration less numerous, yet more efficient.

Cyril E. Muller has congratulated the Government for the achieved attained within a short period in stabilizing the economic and financial situation and has expressed the WB’s availability to further back the Government in promoting the reforms.

The WB official has encouraged the Government to be consistent and clearly set its priorities for the coming 4-5 years. These priorities will be taken into account by the Bank in drafting its Partnership Strategy with Moldova for 2017-2020.

The Moldovan Premier has pointed out that the Government adopted a decision yesterday to start talks on a new funding accord with the WB (DPO-2), as the first tranches will be disbursed till later 2016.

The WB is currently running 10 projects in Moldova amounting to a total of $365.3 million.