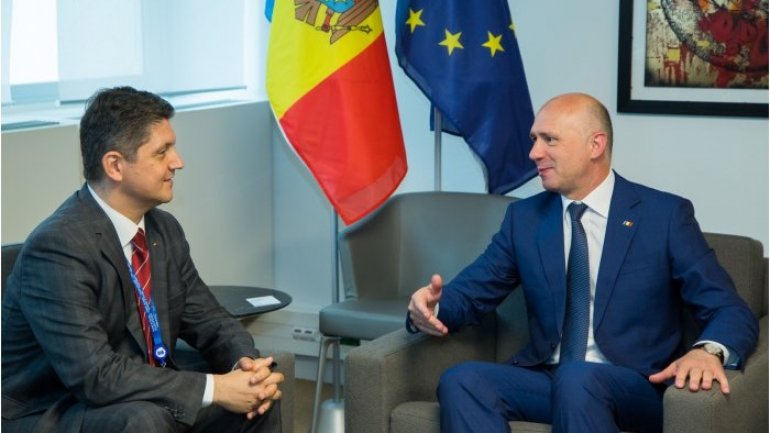 Prime Minister Pavel Filip met on Monday, in Strasbourg, with Romania’s delegation to the Parliamentary Assembly of the Council of Europe (PACE), headed by senator Titus Corlatean.

The chief of Moldovan executive thanked Romania for the support given in the European path of Moldova, offered both at the practical level by sharing experience and assistance in promoting reforms, as well as at political level through the messages and actions undertaken within the EU. Particularly, the PM thanked for his contribution to the establishment of the European Action Group of the Republic of Moldova – “Friends of Moldova”, mentioning in this regard the resumption of the work of the Joint Intergovernmental Commission for European Integration.

At his part, senator Titus Corlatean welcomed the participation of Prime Minister Pavel Filip at the plenary meeting of the PACE and stressed the importance of maintaining the European course of Moldova, assuring all Romania’s support on it.

Referring to the sectorial bilateral cooperation projects, Prime Minister Pavel Filip mentioned Romania to be the main commercial and economic partner of Moldova and reiterated further interest in cooperation in this field, including by increasing investments, finalizing the ongoing projects and initiating new ones.

A priority area approached by the parties was to ensure the energy security of Moldova. So, the Moldovan delegation called for the process completion of implementing the interconnection projects of Moldova to the European energy market and expressed interest into that project development by extending the Iasi-Ungheni gas pipeline to Chisinau on the territory of the Republic of Moldova, and till Onesti, in Romania.