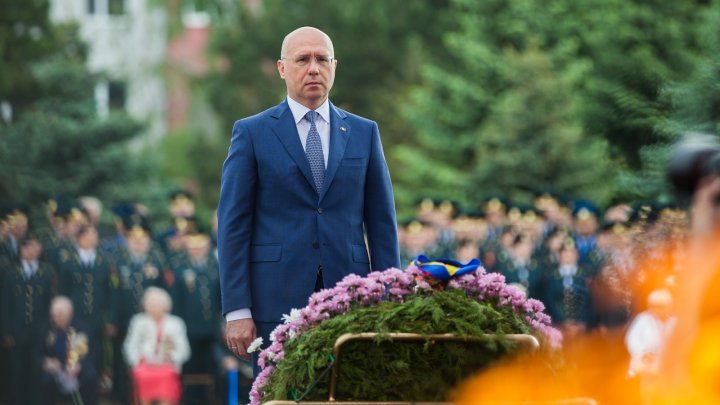 Prime Minister Pavel Filip has commemorated today the soldiers who sacrificed their lives in the Second World War, during a ceremony at Eternitate Memorial Complex. The event was also attended by President of the Parliament, Andrian Candu, President of Moldova, Igor Dodon, deputies, veterans, citizens and Capital's guests.

After setting the flowers at monuments, Prime Minister also took a moment of silence and congratulated the veterans with Victory Day.

The official highlighted that May 9 is a special day, as it marks the fall of Fascism, being celebrated at the same time both Victory Day and Europe Day.

"On this day we celebrate the fall of Fascism and it is good to remember all those who lost their lives on the battlefield. We must learn from the past, as it has much to teach both political leaders and citizens. It is a special day, because 5 years after May 9, 1945, European Union was created. A union that proved that it can offer its citizens a quality life. It is the future of Republic of Moldova" Prime Minister Pavel Filip declared.

"People wait for actions. I approved a plan and managed to solve multiple problems that veterans encounter. We respect all veterans, not because they wished for it, but because they deserve it. Regardless of which side they fought for in the war, they served this country" Prime Minister said.

This year, veterans will receive material help worth 10 000 lei.

In Republic of Moldova live 871 veterans who fought in the Second World War.