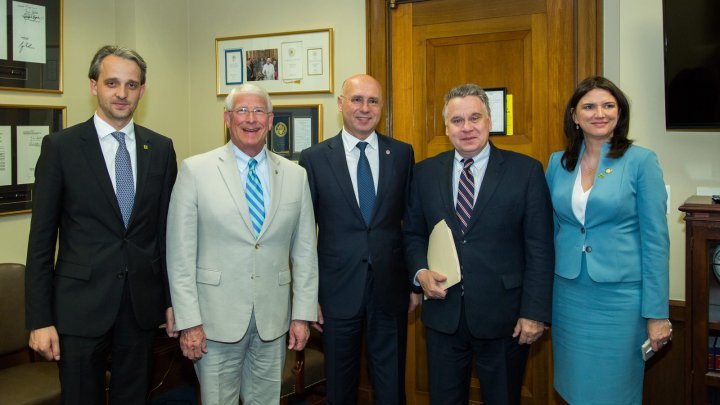 The efforts of the authorities in Chisinau to align our country with international practices on defense, security and the fight against corruption are appreciated in the United States. This was discussed in Washington by Prime Minister Pavel Filip, Senator Roger Wicker and Congressman Chris Smith, who are part of the leadership of the Commission for Security and Co-operation in Europe.

Pavel Filip noted the importance of the resolution by which the US Congress supports the Republic of Moldova, Ukraine and Georgia in the effort of territorial integrity and political sovereignty.

The prime minister said that the implementation of the Association Agreement remains a priority of the Moldovan Executive.

Also in Washington, Pavek Filip had another meeting with Congressmen Pete Olson and David Price. The officials discussed the importance of strengthening the dialogue between Chisinau and the Western partners.

The two legislators are co-chairs of the Political Support Group for the Republic of Moldova.

For his part, Filip welcomed the introduction of the US-Republic of Moldova Resolutions on the US-Moldova bilateral relations on the agenda of the US Congress.

Also during the same working visit, Chief Executive of Chişinău also met with US Secretary of State Mike Pompeo, the third important US official.

The two discussed the main directions of Moldovan-American cooperation and the strengthening of the strategic dialogue between Moldova and the USA.

Earlier this month, Democratic Party Chairman Vlad Plahotniuc paid a visit to the United States, where he met with several congressmen, including Ted Poe and Pete Olson, a member of the Committee on Energy and Trade, and President of Of the US-Moldova Parliamentary Group.

The PDM leader has received assurances from US officials that our country remains in the United States' attention.