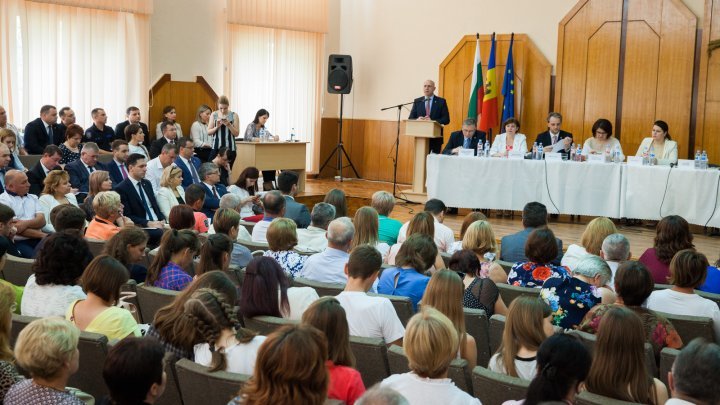 Central authorities increase attention to problems in the localities and open constructive dialogue to overcome them. These are reiterated at joint meeting of government and public authorities in Taraclia district.

Prime Minister Pavel Filip mentioned that the government team will talk directly with the people from the 26 localities of the district and will work to find the formula that is most effective in modernizing the region.

"We have set ourselves the goal of intervening in a new format in solving the difficulties you encounter. I'm sure that people criticize us because the reforms will soon yield results", said Pavel Filip.

The Prime Minister stressed that the Executive's activity has been oriented towards the priority directions for the country's development in the last period: ensuring economic growth, improving the business environment and implementing reforms with a major impact on citizens.

Thus, the reform of the pension system was made - an absolutely necessary measure to exclude social inequities. The calculation formula has been modified, the pensions are recalculated in stages and for the first time the average pension has exceeded the subsistence minimum.

"Reforms will continue - we need to accumulate a solid budget that will allow us to make investments, including social ones," said Pavel Filip, mentioning that the priorities remain the continuation of the reforms in the health and education system, the improvement of the energy infrastructure and the development social projects, such as the First House and Good Roads for Moldova.

Local public authorities have proposed to extend the infrastructure improvement program and have highlighted several areas in which they need Government support - financing of education institutions, teaching Romanian and Bulgarian in pre-school institutions, improving the pay system the public service employees, the provision of quality food for schools and kindergartens. Attention is also paid to repair of school in Aluatu village, for which the Government has already allocated 300,000 lei.

The prime minister noted that many of the issues addressed are in the hands of the authorities and asked the responsible institutions to intervene in each case, according to the areas of competence, to find the best solutions to solve them.