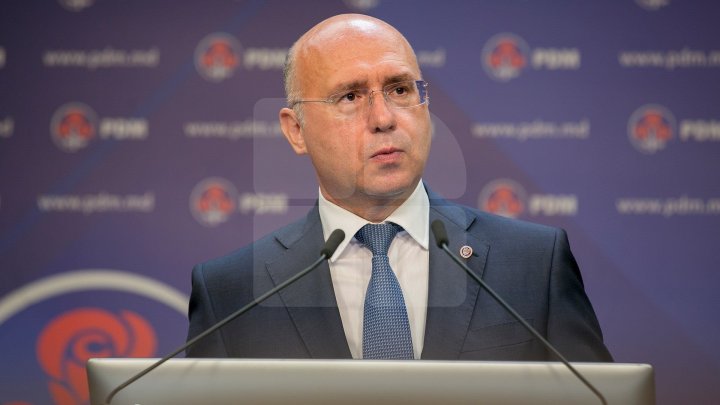 Prime Minister Pavel Filip is deeply disappointed by the resolution voted in the European Parliament, which suspends the macro-financial assistance for our country. At a press conference, the prime minister claims that this resolution, behind which is the pro-European opposition, affects citizens of the Republic of Moldova first.

According to the prime minister, the Republic of Moldova was judged in this resolution through purely political subjective assessments, and did not take the actions of the Government and the fulfillment of the commitments assumed in relation to the European Union.

"My feelings are quite different in relation to this resolution voted by some of the MEPs in the European Parliament. On the one hand, I have to admit that I have a deep disappointment that Moldova is assessed in this resolution by strictly political and subjective assessments, in my view, unrelated to the work of the Government, instead being evaluated by the actions of the Government and the fulfillment of the commitments assumed in report with the European Union.

[...] We implemented all 82 actions from the Roadmap, then we went to implement the conditionality we have for the macro-financial assistance agreement, but also everything we have assumed under the Association Agreement with the EU. Including in the field of justice, all actions, draft laws, Government decisions were approved letter-by-letter as they were coordinated with our European Union partners.

Then I have a sense of responsibility towards my fellow MPs in the Parliament of the Republic of Moldova, because sometimes I may have hurriedly exaggerated to vote for some reforms that were conditional on the financing of the Republic of Moldova. And today, these colleagues feel somewhat disappointed when they see that Moldova has not been evaluated by achievements, but how gurusive are some politicians in the opposition.

I have a sense of blame towards my colleagues in the Government who have nothing to do with the political dimension. I'm talking about government ministers and officials who worked at this time so that we can honor all the commitments we have made. And these commitments were achieved and fulfilled 100% by the Government, and this was also mentioned by Mrs. Mogherini. That, from an economic point of view, everything that the Government of the Republic of Moldova has assumed has achieved.

It is even less unfair that our citizens in the Republic of Moldova are used in this political struggle because I can not call it otherwise. I believe that this resolution was designed to be directed against the citizens. Some opposition politicians, if you remember, have called for blocking funding for the Republic of Moldova right from 2016 when we were in full negotiations with the IMF, and today, it seems to me, they have been blocking macro-financial assistance from the EU, "Prime Minister Pavel Filip said.

The head of the Cabinet of Ministers said that the money from the macro-financial assistance was oriented to food for children in kindergartens and schools, as well as to raise the salaries of the employees in education.

"The money from the macro-financial assistance was aimed at increasing the food for children in kindergartens, for raising the wages of employees in education.

However, the head of the Executive assures that the suspension of macro-financial assistance will not affect the government's business activity. This is because the economic growth gained through the reforms made it possible to complete the ongoing projects, but also to initiate new ones.

"I would like to talk to you a little about the effect of this resolution. I tell you with all certainty that it will not affect financially or economically the Government's activity, because the economic growth we have registered allows us to finalize the ongoing projects. , I want to tell you that we will be starting other social projects too. This is confirmed by the IMF and the World Bank, which today have approved the disbursement of $ 30 million from the DPO Project, and the IMF has approved about $ 34 million, money I have already received, why I talk about the IMF and the World Bank because, in my view, they are institutions that objectively and fairly assess the work of the Government.

Furthermore, I would like to tell you that this resolution will in no way affect our determination to make the necessary reforms. You know this broad agenda of reforms that has been proved and taken as a plan of government activity, so we will not stop for a moment because we are making these reforms, and we have declared not one time, for us, for the Republic of Moldova, but not for the European Union.

I tell you another important thing that this resolution does not in any way change our attitude of openness and co-operation with the Brussels officials. I also followed the debate on the resolution in the European Parliament yesterday and we will examine each one seriously in order to make some changes where necessary. We have also heard constructive criticisms and positive assessments and we will analyze it so that we can correct things where we believe that more effort has to be done, "said Prime Minister Pavel Filip.

Pavel Filip also assured that the Republic of Moldova remains firmly committed to the European path, and in the future the Government will put the urgent needs of the population at the forefront.