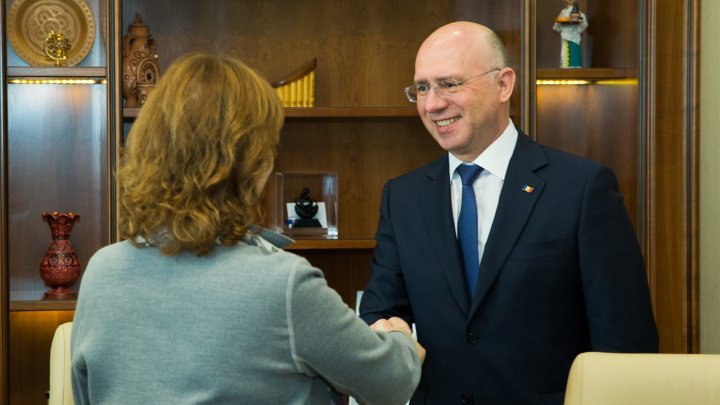 Prime Minister Pavel Filip today met with Nedret Emiroglu, director of the European Regional Office of the World Health Organization (WHO), on visit to Moldova on the occasion of the 5th edition of the Health Prize Gala.

The event is organized in the context of the World Health Day which focuses on universal health coverage and the 70th anniversary of WHO founding.

The prime minister congratulated the WHO official on the occasion of the anniversary of the organization and expressed gratitude for the constant support given to our country in the process of reforming the health system.

The Head of the Executive has stated that the collaborative directions with the WHO coincide with the government's priorities and the health reform agenda. The main reforms concern public health, primary care and the hospital sector.

Pavel Filip mentioned that public health reform has already begun. Thus, a new institution was created - the National Agency for Public Health (ANSP), which, in addition to health and communicable disease control, places a growing emphasis on promoting healthy lifestyles.

The other two reforms are under preparation.

Additionally, the Government also strengthens the emergency service by investing in infrastructure, including procurement of new ambulances, with the necessary resources planned in the 2018 budget.

In this context, Pavel Filip pointed out the importance of WHO support and expertise in the reform of primary medicine and the hospital sector.

WHO Director of the European Regional Office praised the Government for health-promoting reforms, confirming the willingness of WHO to further support our country in increasing the access of the population to quality medical services. In this respect, Nedret Emiroglu mentioned the importance of concrete projects in the treatment of diseases and their prevention.

Collaboration Moldova - WHO is guided by the signed Biennial Agreements. In February 2018, the Collaboration Agreement for the years 2018-2019 was signed with a total budget of US $ 3.5 million. Moldova is a member of the WHO since 1992.