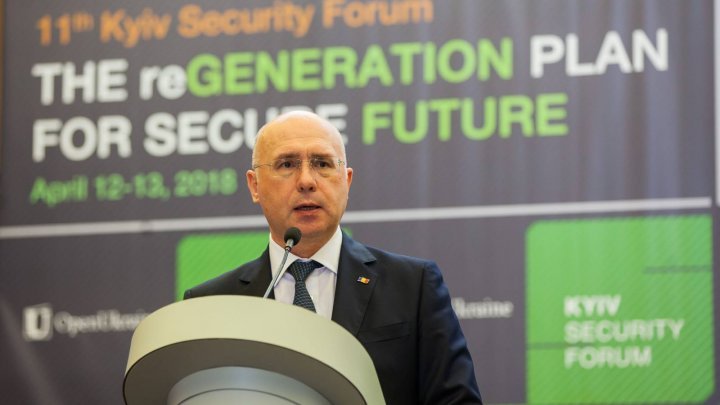 Prime Minister Pavel Filip, who is participating at the Security Forum held in Kiev, declared that frozen conflicts and Russian troops pose the greatest threats to Easter Europe. The official mentioned that as long as conflicts remain unsolved, destructive forces will continue creating separatist plans.

Pavel Filip reiterated that Republic of Moldova requests Russian troops to be withdrawn from the country and for the peacekeeping operation from Transnistria to become an civilian mission with international mandate. A priority also remains the creation and adoption of a special legal status for Transnistria, respecting the sovereignty and integrity of Republic of Moldova.

"Foreign troops remain a serious threat in solving the conflict peacefully, as it contributes to it, encouraging destructive forces to promote separatist plans" Prime Minister explained.

During the speech given at the Security Forum, Pavel Filip also declared that Moldova supports Ukraine's efforts in overcoming the War in Donbass and condemns the annexation of Crimea by Russia. In order to face the existing threats, Prime Minister claims that relations with EU must be consolidated.

"We need a clearer commitment, stronger and more visible, to solve the regional crisis. It is in our common interests to ensure security in Eastern Europe" Pavel Filip said.

The official from Chisinau also added that another danger threatening the whole world, including Eastern Europe, are the cyber-attacks.

At the Security Forum, President of Ukraine, Petro Poroshenko announced that authorities from Kiev begun withdrawal from the CIS: "As multiple countries of this structure refused to condemn the Russian aggression, I believe it is time that we draw up a proposal for the official termination of our participation in the CIS statutory bodies."

Security Forum held in Kiev was initiated by Arseni Iațeniuk's foundation "Open Ukraine", reaching its 11th edition. The event was attended by over 400 politicians, diplomats and businessmen.