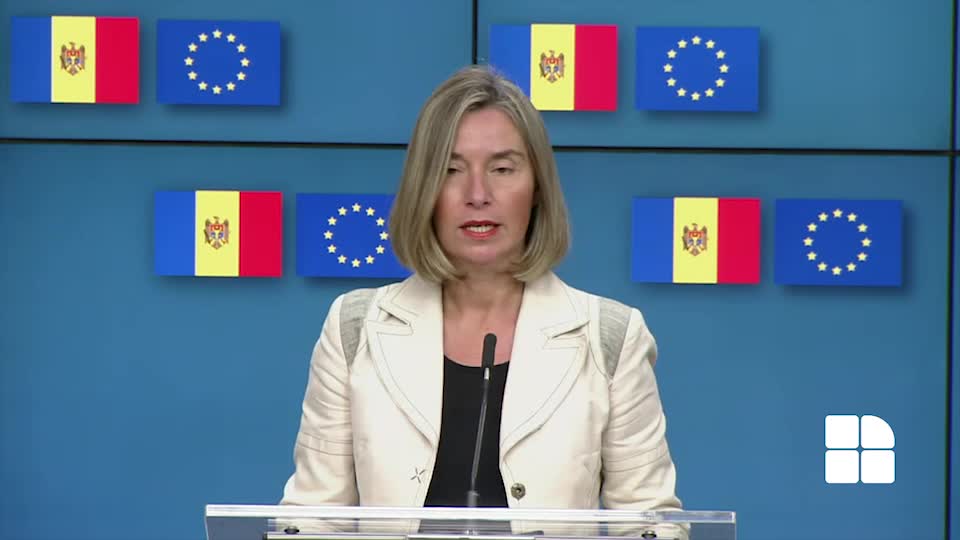 Despite all problems Moldova has faced, the country is determined to advance the political association and economic integration in the EU, it has been said by the country's Prime Minister Pavel Filip in his press statements in Brussels.

The official highlighted the main issues addressed during the meeting and listed many developments in our country. Pavel Filip continue relying on the EU's support, so that our country can record the progress of the government.

"We've discussed both political issues and many sectoral issues. It's the third time I've been in such meeting. I can affirm that relations with the EU become gradually more profound, dynamic, more complex every year. This has benefited our citizens, strengthened institutions and democracy in our country.

In spite of all problems our country and society have been faced, we continue to make a firm stance on political association and economic integration in the European Union.

We are in an electoral year though, our intention is to promote reforms intensively. This is the position of the Chisinau Government, we manage and I believe that we will keep ourselves from the election campaign, as the way we have done throughout entire mandate.

I confirm that Moldova will cooperate with the EU, OSCE, European Council and other international institutions to ensure the parliamentary elections to be fair and in line with international standards.

This is our main political objective. We are aware that elections must be recognized and there is no element to question the fairness of the election.

I declare the opening of Chisinau for as many observers as possible, so that they can monitor closely and establish that all voters are offered the equal rights.

Regarding the media sector, which we discussed today. Our expectations, but I believe that the European Union heard the new draft Audiovisual Media Services Code, which was approved at the first reading of the Parliament in Chisinau and is currently being transmitted to the Council of Europe, OSCE, but also to the European Commission. This code has worked in a strong team, including with the support of the Council of Europe and international experts in this field.

Fighting corruption and preventing money laundering are issues of major concern on our agenda. We are getting closer to the moment when the new competent structures, the National Integrity Authority and the Anti-Money Laundering and Prevention Service will be fully operational. Strengthening the institutional framework enables more effective fight against these issues. This is the position of the Government and the Government is able to elaborate and ensure the approval of the legislative framework.

I have informed our European colleagues about planning measures for justice reform. Earlier this year, we have taken concrete actions during 2018, during our term of office, and I think it is absolutely natural, and in this way I want to reconfirm that we will complete this reform of justice, which we have called it a conventional one.

We have also discussed bank fraud, the competent authorities are now working on the strategy for recovering fraudulent funds. This strategy is being developed by the Prosecutor General's Office, based on the report presented by the international investigation company KROLL. At the same time, I am glad that the European Union appreciates the positive developments in the stabilization of the financial and banking sector, which eventually allowed European investors to come to this field. This side was a principle and an important one for this Government.

We have found and rejoiced that the volume of trade with the European Union has increased, which confirms the beneficial character of the free trade agreement, given that some products are very successful in the European Union market, we have established our partners in Brussels.

We have also discussed reforms in the energy sector as well as transport. We have greatly appreciated the assistance provided by the European Union for the implementation of the Association Agreement. We are well on the way to complying with macro-financial assistance conditionality.

By the end of the spring-summer parliamentary session, we have proposed to have all the conditionalities for all three installments of macro-financial assistance.

Regarding the Transnistrian issues, we continue to play an active role in the European Union. European colleagues welcomed the progress made in recent months and encouraged the sustained positive dynamics.

Such cooperation helps to increase the resilience of the country to external and internal challenges. I would like to say that we are encouraged by the clear commitment of the European Union to continue to provide support to our country in several areas. We, in turn, will do our best to make the European elections of the Republic of Moldova truly irreversible. It is an objective that we have proposed at the beginning, "said Premier Pavel Filip.

PUBLIKA.MD reminds that the fourth reunion of the Association Council Moldova - EU takes place in these days, where the Moldovan Prime Minister Pavel Filip participates.

At the event, the officials discuss the reforms in justice, fight against corruption, development of the business sphere and the civil society.

The working visit of the prime minister will be finished on May 6.